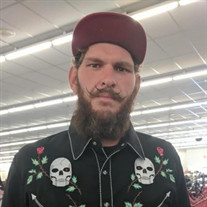 Alex T. Bueler, entered into eternal rest on the morning of April 29, 2022 in Camp Verde, Arizona. He was born a twin brother of Adam, and the sixth of eight boys, on May 26, 1981 to Franklin and Karen Ann (Ramey) Bueler in Mesa, Arizona. Alex lived in Chandler as a child until 1986 when the family moved to Prescott, Arizona. He attended Miller Valley and Abia Judd Elementary schools. He also attended Granite Mountain Middle School from ’94-’96. In 1996, he and his two younger brothers moved to St. George, Utah where he went to Dixie Middle and High Schools. He made friends instantly. Despite what he would tell our mother, she quickly found out how popular he became. This would prove true in every aspect of his life. Everywhere he went, someone would render the old “Hey, Ox”, “Yo, Ox!” It happened on a daily basis. Despite our amazement then, we now understand the life that he led and the kindness and generosity of his enormous heart. He never met a stranger, only friends he hadn’t made yet. These friends have shared countless stories of how giving and caring he was. He never judged anyone for the walk of life they were on, he only cared about the meal that they had—or didn’t have—and if they needed anything. It could be as small as a hug or a high five. Alex loved life and music in equal measure. No, he was full of both, and music was his core. Whether hardcore or reggae, he loved it all. Stories abound of his concert attendance like the Warped Tour to see AFI to the local shows that came through St. George like Open Hand or Billy. He became fast friends with all of them and maintained that friendship with many through years. In high school he loved graffiti art. Enough to get him into some trouble. “How tall are you?” a judge asked him. That led the judge to make a call and court order him to play football for the school team and put the artistic side to use and was asked to paint a mural at Dixie High School’s football field. His art never let up, always making a mark wherever he went and whatever he owned. It all had to have his signature mark—or at the very least a sticker slapped on it. Something to let it be known: he was here, living and loving. Alex knew how to have fun. He was absolutely the life of the party. His comedy often brought friends and family to laughing tears. He carried that wit and humor wherever he would work. He was a hard worker. That was what he knew, and it was among his best qualities. If he had a project he wouldn’t let up until it was finished. Equally important in his mind, when the work was done, he knew how to relax and let loose. He enjoyed lounging as much as working. He loved listening to music, which was on nearly 24 hours a day unless he was fishing. He was a serious angler. If any hobby rivaled his passion for art, it was a day at the lake or stream, rod in hand. Becoming a father was the highlight of his life, one he eagerly anticipated. Alex adored his daughter. They shared a bond that he carried close to his heart. She looked at him with the most loving eyes, and he met her adoring gaze with his undivided attention. She was his greatest joy and brought the most love from his huge heart. Alex’s life simply cannot be reduced to lines on a page. He was again, larger than life and larger than most of his friends and they saw that huge heart as well as his family. He possessed a pure heart of gold and it showed by the countless examples that were shown and by the stories from only people that we knew as strangers, Alex didn’t know a single stranger. Children, nieces and nephews looked at him with the wondering eyes of amazement and saw right to his heart and they felt it in the way that he talked to them and included them in everything. He is preceded in death by his twin brother, Adam, his father, Franklin, his grandparents Frank S. and June Bueler and F. Loyal and Louella (Smith) Ramey. His friends Mikey Bailey, Travis Weston and Ryan “Wu” Snow. He is survived by his Mother, Karen Ann, his daughter Bailey, his six brothers, Sam (Jennifer), Ethan, Jon (Marsha), Ben (Michelle), Graham (Heather) and Elliott aka Charles. Memorial services will be held on Saturday, May 21, 2022 at 3:00 pm at the Serenity Funeral Chapel located at 1316 S. 400 E. St. George, UT. A bbq will follow at Snow Park 275 E. 900 S. next to the skate park. For viewing of the service by Zoom click the link on the internets enter the meeting ID and passcode below https://us06web.zoom.us/j/88264059698?pwd=NHMyV1ovOW1xSlBKSG1INVNwT29xZz09 Meeting ID: 882 6405 9698 Passcode: 826703

Alex T. Bueler, entered into eternal rest on the morning of April 29, 2022 in Camp Verde, Arizona. He was born a twin brother of Adam, and the sixth of eight boys, on May 26, 1981 to Franklin and Karen Ann (Ramey) Bueler in Mesa, Arizona. Alex... View Obituary & Service Information

The family of Alex T. Bueler created this Life Tributes page to make it easy to share your memories.

Alex T. Bueler, entered into eternal rest on the morning of April...

Send flowers to the Bueler family.