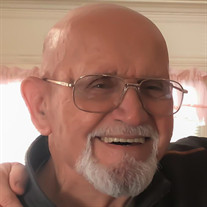 Alfred passed away at his home in St. George on April 7, 2022, of complications of Alzheimer&#8217;s Disease. He was a resident of St. George since 1989, when he moved here to retire, along with his late, beloved wife Evelyn, who passed away... View Obituary & Service Information

The family of Alfred Goguen created this Life Tributes page to make it easy to share your memories.

Send flowers to the Goguen family.