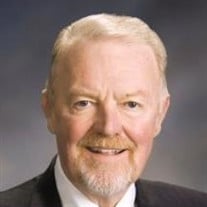 St George, Utah – Allen Michael “Mike” Hillis, age 74, passed away in his home on September 27, 2018, from complications from leukemia. Mike was born on December 12, 1943, in Bend, Oregon to Louis A. Hillis, and Isabelle Allen. Growing up in Bend, Mike attended St Francis grade school, Cascade Junior High, and Bend High, where he was a football player and student body president. He attended the University of Oregon from 1962-66, where, as a member of the Beta Theta Phi fraternity, he made many lifetime friends and memories. Upon graduation with a BA in Business, he married his college sweetheart, Kathy Phipps. The couple settled back in Bend, where they raised their two children while Mike ran Oregon Equipment, the restaurant supply and refrigeration business started by his father. He sold the business in 1982 and went to work for the Organizing Committee of the 1984 Olympic Games in Los Angeles. As Vice President of Ticketing, Mike oversaw the sale and distribution of hundreds of thousands of tickets to all the Olympic events, in addition to managing over 4000 volunteer ticket-takers. In 1984 the family moved to Salt Lake City, where Mike worked as President of Easton Aluminum, an aluminum sporting goods manufacturer. During that time, Mike also served as president of the US Archery Manufacturer’s Association, and travelled the world promoting the company and sport of archery. In 1992 Mike left Easton, and, pursuing his love of doing deals and being his own boss, eventually found a great fit as a commercial real estate broker, which he did in Salt Lake and Las Vegas up until his “semi-retirement” 2017. He served as president of the Society of Industrial and Office Realtors (SIOR) in 2014. Outside of work Mike had many passions. He was a lifelong skier and hunter and travelled the world to pursue both sports. He loved to fly, eventually receiving a commercial pilot’s license, and was an avid sailor. He was fascinated by the history of the Old West, particularly the role of his grandfather, William “Alaska Bill” Hillis, and was an active member of the Single Action Shooting Society (SASS). Mike is survived by his children, Greg Hillis of Salt Lake City, Utah, and Heidi Hillis (Damien Koerber) of Pucon, Chile; grandchildren, Max and Sam Koerber; and brother, Harv Hillis (Mary Powell) of Bend, Oregon. The family would like to thank Dixie Home Hospice for their incredible support these last few months. In lieu of flowers, Mike wanted donations to be made to the Oregon High Desert Museum (www.justgiving.com/fundraising/mike-hillis). Mike requested a private family service, but friends and colleagues are invited to participate in a virtual memorial celebrating his life at www.forevermissed.com/mike-hillis.

The family of Allen Michael “Mike” Hillis created this Life Tributes page to make it easy to share your memories.

Send flowers to the Hillis family.