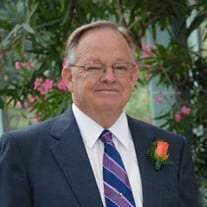 Alma (Al) LeRoy Baker, 87, passed away on January 9, 2021, due to complications following a stroke. His departure leaves family and friends with loving memories of a gentle man with a pure heart and generous spirit. Al was born on December 17, 1933, the fourth of eleven children born to William Earl Baker and Melba Webb, of St. George, Utah. Following high school graduation Al enlisted in the Air Force as an aviation cadet with the expectation of eventually becoming a pilot. Flying training came naturally for Al, finding himself near the top of his class. Unfortunately, the end of the Korean War and the subsequent Air Force drawdown resulted in the cancellation of Al’s entire aviation cadet class just weeks prior to graduation. Faced with choosing between a non-flying path or continuing to fly by transitioning to become a flight engineer, Al opted to fly for the rest of his life. And boy, did he fly! Al’s aviation career stands unmatched and was quite extraordinary. Over a distinguished 35 year Air Force career, he was qualified on several cargo airplanes, including: C-46 Commando, C-47 Skytrain, C-54 Skymaster, C-97 Stratofreighter, C-124 Globemaster, C-141 Starlifter, and the C-5 Galaxy. He flew missions supporting US military and state department operations throughout the world, to every continent, including Antarctica, and over 170 countries. These countless amazing and unique experiences provided endless stories for friends and family. He accrued over 27,000 flying hours in the Air Force alone, which amounts to more than three years spent in the air. Known for his thorough but fair checkrides as an examiner, Al was a legend in the C-5 community, where he rose to the top enlisted rank of Chief Master Sergeant. Following his Air Force retirement in 1989, he flew as a DC-10 flight engineer for World Airways for seven more years before retiring from flying for good in 1994. Al lived quite a nomadic life early in his Air Force career, assigned to live in Florida, Texas, Oregon, Illinois, Utah, and Tripoli, Libya. While stationed at Travis Air Force Base, California, he met Mary Ann Mathews. They were sealed in the St. George temple on October 1, 1960. They began married life in California where their first son, Brian, was born. This was followed by a three year tour to Tachikawa, Japan, where their second son, Brent, was born. They eventually moved back to Travis AFB for the remaining twenty years of their Air Force life. After Al’s retirement they returned to St. George to be near family. Soon after this last move Mary Ann unexpectedly passed away. Al met Marcia Adamson Taylor and three weeks and two days later they eloped to Las Vegas on March 9, 1992. Despite its quick start their marriage was marked by its tenderness and durability through life’s ups and downs. Their years together were actively spent tending their beautiful back yard, traveling the country in their fifth wheel, and on ATV rides with friends. Their marriage introduced an additional three children to his life, and he loved each of them as his own. Al was active in the LDS church, serving in various callings, including two bishoprics, as High Priest Group Leader, and for eighteen years in the St. George Temple at the recommend desk and as Assistant Recorder. He was active in the community, serving as President of the Dixie College Scholarship Fund, and as Director of the St. George Live Historical Tours. A self-described shade tree mechanic, Al used his mechanical skills to help numerous family and friends, as well as restoring a 1950 bullet-nose Studebaker. He served everyone in his orbit and was always willing to give or loan anything he had. Favorite pastimes included the annual deer hunt with his brothers, fishing, reading, classical music, the arts, general aviation, cheering on his Oakland teams (Raiders and A’s), visiting with friends at the watering hole, and Diet Coke. Survived by his wife Marcia, children Brian (Kate), Brent (Melissa), J.D. (Amy), Ann (Mark), Matthew (Nancy), seven grandchildren and three great-grandchildren. Also siblings: Ken, Darrell, Mary Anne, Steven and Gai. Preceded in death by his wife Mary Ann, daughter-in-law LaDonne, and siblings Lynn, Lloyd, Norman, Sheila, and Merlin. A private memorial service will be held for immediate family members. Interment will be at the St. George City Cemetery with full military honors. To watch the live Funeral Service, go to mywebcast.churchofjesuschrist.org/stgeorgeutahsunsetstake

Alma (Al) LeRoy Baker, 87, passed away on January 9, 2021, due to complications following a stroke. His departure leaves family and friends with loving memories of a gentle man with a pure heart and generous spirit. Al was born on December... View Obituary & Service Information

The family of Alma Le Roy Baker created this Life Tributes page to make it easy to share your memories.

Send flowers to the Baker family.