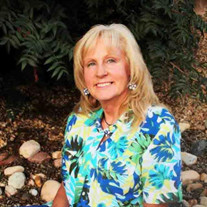 April Bayles Ruesch, beloved wife, mother, grandmother, great-grandmother, sister, and friend was taken back to her Father in Heaven and Savior, Jesus Christ on January 8, 2022. She was born on April 20, 1950, in Monticello, Utah to Platte Durham Bayles and Alice Marilyn Wilkinson. She was married to Ronny Ruesch on August 15, 1975, in Las Vegas, Nevada, and that marriage was solemnized in the St. George, Utah Temple on August 21 of the following year. April began life in Blanding, Utah but spent some of her youth all over the West in places such as Flagstaff, Arizona; Reseda, California; and finally, Kanab, Utah, where she graduated from high school. As a young adult, April spent about a year in college before going on to work for the Arizona Highway Patrol as a dispatcher. She then moved to Las Vegas, Nevada, where she met the dashing man she had come there seeking, Ronny Ruesch, along with the two girls that would become her eldest children, Tammy, and April. She often said that these two daughters were a big part of the reason she chose Ronny. This marriage resulted in the birth of seven more children, making in total eight girls and one boy, whom she raised in Southern Nevada (Las Vegas and Pahrump) and Southern Utah (Apple Valley and Cedar City). One more boy was added to the family when she adopted and raised her grandson, Tyler, but the impact April had on countless other grandchildren, great grandchildren and others cannot be measured. She was an avid shopper, and in later life, online shopper, which could be attested to by the countless packages that arrived on her doorstep on a regular basis. But at heart she was a rescuer, and she dedicated her life to helping others, people, and pets, and serving the community around her. To this end, she successfully operated a holistic medicine practice with her husband in Las Vegas for many years. And for the rest of her life thereafter, she continued to dedicate herself to the task of educating herself and others on health and nutrition. She was a lifelong active member of The Church of Jesus Christ of Latter-Day Saints and to the end of her life took her relationship with God very seriously, serving in many capacities within the church. April is survived by her children: Tammy Ann Cline, April Sue Joines (Mark), Elishia Joy Ruesch, Autumn Dawn Baker (Jason), Ronny Platte Ruesch (Diann), Veronica Morgan Young (Isaac), Trinity Myrle Cyr (Jonathan), Cherish Angelaina Jerger (Drew), Jaquete Merwina Lasley (Preston), and Tyler Steven Ruesch (Taryn), her siblings: Stephen Bayles (Sandi), Gordon Bayles, Carolyn Pehrson (Dave), Tina Pech (Mike), Mary Luttio (Mike), and Brett Bayles. She currently has over 43 grandchildren and more than 20 great grandchildren. She was preceded in death by and had a grand reunion in heaven with her husband, Ronny Ruesch; her parents, Platte Durham Bayles and Alice Marylin Wilkinson; and her sisters, Gayle Bayles and Debra Bayles. A viewing will be held on Saturday, January 15, 2022, from 9-10:45 am at The Church of Jesus Christ of Latter-Day Saints chapel at 274 S 100 W in Hurricane, Utah with funeral services following the viewing. Interment will be at the Gifford/Jolley Cemetery in Springdale, Utah at 1:30 pm.

April Bayles Ruesch, beloved wife, mother, grandmother, great-grandmother, sister, and friend was taken back to her Father in Heaven and Savior, Jesus Christ on January 8, 2022. She was born on April 20, 1950, in Monticello, Utah to Platte Durham... View Obituary & Service Information

The family of April Bayles Ruesch created this Life Tributes page to make it easy to share your memories.

Send flowers to the Ruesch family.