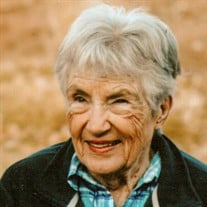 Audrey Jeanette Sparks Spencer (87) passed away peacefully on July 14, 2020 in St. George, Utah, of age-related health problems (NOT Covid 19). She had been living at Seasons Health and Rehabilitation in St. George since August 1919, after breaking her hip in a fall. She moved to St. George in 2003 from SLC, UT. Audrey was a member of The Church of Jesus Christ of Latter Day Saints and a descendent of LDS pioneers to the Bear Lake Valley in southern Idaho; born in Montpelier, Idaho on April 4, 1933. Her parents, Emmett and Maythel Humburg Sparks, raised their family in Dingle, Idaho, a ranching community where her father worked and Audrey attended school with two younger siblings until she went to High School in Montpelier, Idaho. She was an excellent student and represented her High School at Idaho's Girl's State in 1951. After graduation in 1951 she moved to Salt Lake City to attend LDS business college, and then worked in the records dept. for the FBI in Salt Lake. While living and working there she met her husband, Robert William Spencer, from Fillmore, Utah. They met while touring the Salt Lake Temple grounds with friends and discovered they had both been born in the Bear Lake Valley. On September 8, 1952 they were married in the Salt Lake City, Utah temple and raised their family of six in SLC near the U of U. Audrey was Bob's faithful and active partner in the laundromat business they bought in 1966. They moved to Bountiful, Utah In 1975 with their three youngest children, two of whom graduated from Bountiful High School. Audrey served for a time in the laundry of the Bountiful Temple. She also worked in the office of Mormon Handicraft and for a number of years at the offices of the LDS Church's architectural department in downtown SLC. Audrey was a quiet woman of intelligence and curiosity. She loved reading (especially biographies), gardening, the outdoors, swimming and playing games with family and friends. She was a wonderful mother whose six children, twelve grandchildren and sixteen great-grandchildren will sorely miss her calm spirit, kindness and practical approach to life. She was preceded in death by her parents, sister Peggy Dawn Sparks Camp, and husband Robert William Spencer. Audrey is survived by her brother, Gregory (Jolene) Sparks of Montpelier, Idaho and by her children: Janet (Doug) Weaver, Deaver, WY/St. George, Utah; Terri Tchernoivanov, Gilbert, AZ; Craig (Donna) Spencer, Washington, Utah; Laurie Spencer, Ivins, Utah, Kelly (Mike) Angus, Ballard, UT and Sara (Bryce) Cook of Mesa, AZ as well as grandchildren (12) and great grandchildren (16). The family extends its gratitude to Seasons Health and Rehabilitation as well as Applegate Hospice in St. George, UT for their kind care of our mother during the last year. Due to Covid-19 their will be no funeral. A brief viewing/service for family members will be held Friday evening at 7:00 PM at Serenity Funeral Home: 1316 S. 400 E. A3 in St. George, UT.

Audrey Jeanette Sparks Spencer (87) passed away peacefully on July 14, 2020 in St. George, Utah, of age-related health problems (NOT Covid 19). She had been living at Seasons Health and Rehabilitation in St. George since August 1919, after... View Obituary & Service Information

The family of Audrey Jeanette Spencer created this Life Tributes page to make it easy to share your memories.

Send flowers to the Spencer family.