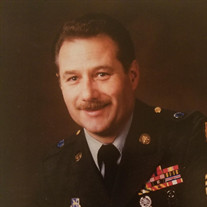 Loving husband and father Bernd “Bernie” Rudolf Henkel of St, George, Utah, age 79, passed away on December 25, 2019 peacefully in his sleep. He was born on December 13, 1940 to Heinz and Ruth Henkel at a very dangerous time of World War II in Erfurt in the state of Thuringia, central Germany. After escaping East Germany as a young child with his family, he eventually immigrated to America. Once he became old enough he wanted to serve his new country. He married Sheryl Schlappi on December 19, 1964, in the Salt Lake Temple. Bernie spent 18 ½ years in the military. Most of his time in the service was spent in the Army ascending to the rank of Master Sergeant as a linguist and interrogator. The remainder of this time in service was in the U.S. Marines as a Seabee. Bernie was a true patriot and proud American in every sense of the word. He loved serving his country and was very passionate about the work he did while serving. His primary career was that of a journeyman mechanic and a safety specialist leader. He spent many years working at Hercules Aerospace Co. in Salt Lake City. Because of his background he could fix, repair or build anything around the house and that has been his favorite pastime for the last 15 years of his retirement. When he was younger he loved to race road bikes, play on German soccer leagues, and coached youth soccer. He enjoyed playing many instruments including the trumpet and harmonica which were his favorite. Bernie is survived by his spouse, Sheryl Henkel, of St George as well as his son, Scott Henkel (Melissa), of Vineyard and his daughter Michelle Henkel Orton (Kevin), of St George, 13 grandchildren and three great grandchildren; and a twin brother Ronald Henkel (Sara) of Clear Water Beach FL. The family would like to thank all of the staff at the Southern Utah Veterans Home in Ivins. A very special thank you to the Marine Corp League here in St George and all of the great people at Serenity Funeral Home. Funeral services will be held on Friday January 3, 2020 at 11:00 am at the chapel located on 415 Westridge Drive in St. George. A viewing will be held at 10:00 am the same day and location. Interment will be at the Parowan Cemetery at 3pm on Friday, January 3. Military honors will be provided by the St. George Marine Corp League. Family and Friends are invited to share tributes online at www.SerentyStG.com. Arrangements and memorial tree planting by Serenity Funeral Home of Southern Utah, 986-9100.

The family of Bernd "Bernie" Rudolf Henkel created this Life Tributes page to make it easy to share your memories.

Send flowers to the Henkel family.