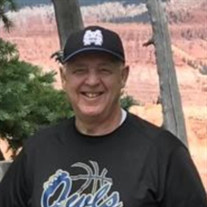 Bert T. King Jr., 73, passed away on Monday, January 25, 2021 in St. George, Utah. He was born November 13, 1947 in Algona, Iowa to Delores Hauptman and Bert T. King Sr. Bert joined an older sister Barbara and the family of four soon moved to the San Francisco area. One other sister, Debi, joined the family when Bert was 6. He loved growing up across the street from Golden Gate Park where neighborhood baseball games happened regularly. He aspired to play professional baseball and snuck into all the Giant games he could. He met and married Dorothy (Dottie) McCollian in 1969 and a few years later, they were blessed with a son, Bert T. King III on New Years Eve. Their marriage ended in 1984, but they always remained friends. Bert started his profession of building painting as an apprentice under his father. He then moved onto paint with contractors and eventually within the systems of higher education. He worked at Moffett Field, San Jose State, and San Francisco State before moving to Oregon. He went to Klamath Falls to take the state test and ended up at Oregon Institute of Technology (OIT) where he worked in the Sign/Paint Shop for 46 years. Bert worked as a painter, but loved OIT athletics. For forty-five years, Bert volunteered at basketball, football, softball, volleyball and baseball games. He loved them all but basketball was his favorite and he was proud to be at their three national championships. Go Owls! In 1993, Bert met Sandra (Sam) Williams Cooke at the intramural softball sign-up board in the OIT College Union and they put a softball team together. Within a year of their “meet cute,” Bert and Sam King put together their own team with Bert’s son Little Bert and Sam’s two daughters, Trisha and Tabatha when they married on July 16, 1994. Bert loved serving and held many church callings, Young Men’s President, Ward Mission Leader, Counselor in YSA Branch, Ward Clerk, but his favorite was as a Temple worker in the Medford Oregon and St. George Temples. He served two service missions, one in Klamath Falls and the other in St. George. He is survived by his wife, Sam; son, Bert and his wife, Sharon and their children Caiden and Camryn of Vista, California; daughter, Trisha Sanchez and her husband, Julian and their daughters, Ariana and Kalina of Syracuse, Utah; daughter, Tabatha Charlton and her husband, Frank and their children, Caitlyn, Nolan, and Brooklyn of Kennewick, Washington. He is also survived by his sister, Debi Gustafson and her husband, Kelly of Coupeville, Washington and many nieces and nephews. He is preceded in death by his parents, Bert and Delores King and his sister, Barbara McDonald. Funeral services will be on Friday, January 29th, 2021 at 1:00 p.m. with a viewing from 11:30 a.m. to 12:45 p.m. at the Desert Canyon Chapel, 3981 E. Desert Canyon Parkway, St. George, Utah. The following day, Saturday, January 30, 2021 at 2:00 p.m. interment will be held at the Malad Idaho Cemetery. Funeral services will be live streamed via Zoom at https://zoom.us/j/91856029007?pwd=Sm92c3ErUW1RMThjeVJjTmpVWDM5UT09 Meeting ID: 918 5602 9007 Passcode: 270069 Bert’s kind heart and big personality allowed him to make friends wherever he went and he will be missed by all. In lieu of flowers, donations can be made to the family to be used for his headstone. https://youtu.be/wDG2E1emAM4

The family of Bert T King created this Life Tributes page to make it easy to share your memories.

Send flowers to the King family.