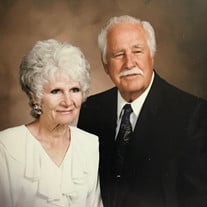 Our beloved mother, grandmother and great grandmother Bertha Bonnie Rowley Steglich Sweat, returned home on Monday, November 22, 2021. She passed away in the home of her daughter and son in law in Beaver, Utah. Bonnie was born May 24th, 1929 in Magna, Utah to Roswell Irwin and Zina Thayne Rowley. She was the youngest of 10 children. During the depression and war Bonnie and her family moved often looking for work. But Bonnie enjoyed the adventures and felt loved and protected by her loving parents and siblings. Her family eventually settled for good in the Salt Lake Valley. She met and married Jerrold Karl Steglich on March 5th,1949 in Salt Lake City. They were blessed with 5 sons and 5 daughters, the first two being twins, Jerry Brent and Cherrie Lee who died shortly after birth. Bonnie and Jerrold remained in the Salt Lake City area until 1972 when the couple divorced. Bonnie and 6 of her children moved to Toquerville, where she remained while raising the rest of her children. She often said that her testimony of prayer and paying tithing were the only things that carried her through the difficult times. Her most valued treasures were her faith and her family. Bonnie was an active member of the Church of Jesus Christ of Latter Day Saints and served faithfully in many callings throughout her life. In 1992 Bonnie was called to serve a mission in Birmingham, Alabama. After returning home, Bonnie met the love of her life, Boyd E Sweat. They were married in the St George Temple on June 15th, 1996. They later served an LDS mission in the Oklahoma City Mission. Their hobbies included raising and training race horses, fishing together on Flaming Gorge, watching the Utah JAZZ and traveling to visit their children and grandchildren in Southern Utah. He preceded her in death on December 13, 2012. In her later years Bonnie dedicated her time and efforts to her large posterity, the Temple and her neighbors and others that she ministered to. Bonnie is survived by her children: Jerry (Darla) Steglich, Shauna (Amy) Steglich, Jill (Kevin) Demille, Tami (John) Snyder, Chad (Shelly) Steglich, Ryan (Tammy) Steglich, Chris (Keri) Steglich; 40 grandchildren and 66 great grandchildren. She was preceded in death by her eternal companion Boyd; her parents; all of her siblings; infant twins Jerry and Cherrie; daughter Kathleen Wheeler; grandsons Chris Hansen and Shane Snyder; granddaughter Holli Hansen. She will be greatly missed by her family who looked forward to her daily texts, faithful prayers, and enduring testimony of Jesus Christ. Unfortunately, due to covid concerns that have recently come to our attention, the viewing and funeral for Bertha Bonnie Sweat will no longer be held. There will be a private family service held at the gravesite on Thursday. Interment will be in the Toquerville City Cemetery under the direction of Serenity Funeral Home of Southern Utah. 435-986-2085

Our beloved mother, grandmother and great grandmother Bertha Bonnie Rowley Steglich Sweat, returned home on Monday, November 22, 2021. She passed away in the home of her daughter and son in law in Beaver, Utah. Bonnie was born May 24th, 1929... View Obituary & Service Information

The family of Bertha Bonnie Sweat created this Life Tributes page to make it easy to share your memories.

Send flowers to the Sweat family.