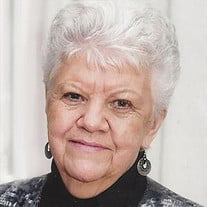 Bette Gwen Fonnesbeck Baker, 84, passed away December 20, 2019, in St. George, Utah. She was born September 21, 1935, in Smithfield, Utah and was the sixth of eight children born to Stella Gwen Bair and Willis Severine Fonnesbeck. She was raised in Smithfield, UT. As a child, Bette was raised on a farm, picking corn, beets, and milking dairy cows. She was a skilled softball player being recruited at the age of 13 to play on the city team as shortstop and pitcher. She graduated from North Cache High School in 1953. She married Darrell S. Winn in 1955. Later divorced. Bette married Floyd “Chick” O. Baker on August 2, 1974; the marriage was solemnized in the Seattle Temple in 1983. They spent 37 happy years together before "Chick's" death in 2011. They especially loved their time living on the coast in Florence, Oregon. Bette retired from the Bureau of Land Management in 1994, having said her most memorable experience was taking the role of a dispatcher during a forest fire for 10 days. Bette was a faithful member of the Church of Jesus Christ of Latter Day Saints holding many callings; including Stake Sports director, Relief Society President, and a dedicated visiting teacher. She planned many memorable ward holiday parties and events. She and Chick also served as service missionaries in Blue River, Oregon. She moved to St. George, Utah in 2017 and fulfilled her dream of working in the St. George Temple. Bette had many hobbies. She was a member of the Daughters of the Utah Pioneers and proud of her Danish heritage. Her home was always organized and beautifully decorated while her guests were treated with delicious meals at the table. Her interests included painting, sewing, quilting, knitting, cooking, gardening and crafts. Her quilts and sports motif snowmen will be cherished by many. Bette is survived by: her daughters and their husbands, Leigh Ann Turner (Wayne), Tamara Zamora (Javier), Roxanne Malloy (Tim); and many grandchildren; great-grandchildren; nieces; nephews; and stepchildren; she is also survived by her siblings, Anna Brough, Norma Bergeson, DeMar Fonnesbeck, (Sharon), Lois Bunnard, Dixie Fonnesbeck, (Bruce). She was preceded in death by: her husband; her parents; her sons Jeff Winn and Darrell Jess Winn; Brother Dale Fonnesbeck; sister Ora Law; and three brother in laws. She was a devoted and caring daughter, wife, mother, grandmother, sister, and friend. Her legacy will be her beautiful example of service to others, her love of family and her faith in the Lord Jesus Christ. The family would like to thank Encompass Home Health and Hospice for their tender loving care. Funeral services will be held Monday, December 30, 2019, at 12:00 Noon at the Church of Jesus Christ of Latter Day Saints, located at 4375 West 15600 North, Fielding, Utah. A viewing will be held from 10:00 a.m. to 11:30 a.m. prior to the service. Interment will follow at the Fielding Cemetery. A separate memorial service will be held Friday, January 3, 2020 at 1:30 p.m. at the Church of Jesus Christ of Latter-day Saints, located at 259 North Mall Drive, St George, Utah. Family and Friends are invited to share tributes online at www.SerenityStG.com. Arrangements and memorial tree planting by Serenity Funeral Home of Southern Utah, 986-9100.

Bette Gwen Fonnesbeck Baker, 84, passed away December 20, 2019, in St. George, Utah. She was born September 21, 1935, in Smithfield, Utah and was the sixth of eight children born to Stella Gwen Bair and Willis Severine Fonnesbeck. She was... View Obituary & Service Information

The family of Bette Gwen Fonnesbeck Baker created this Life Tributes page to make it easy to share your memories.

Customized sympathy cards. Mailed for you.