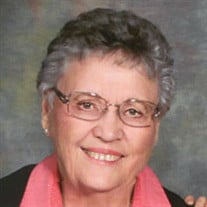 Our beloved mother Beulah Mae Gifford Pectol passed away peacefully in her home on September 11, 2018 at the age of 95. She was born on May 19, 1923 in Mt. Trumbull, AZ to Cyrus and Ina Bundy Gifford. She was the oldest daughter of ten children and lived in a time of great hardships. On October 4, 1940 she married the love of her life Willard Dwight Pectol of Washington, Ut. Their marriage was later solemnized in the St. George Temple on December 5, 1944. Together they raised six children. Beulah poured her heart into everything she did especially when it came to her family. She loved having big family dinners on all major holidays. She loved to camp, skeet shoot, fish, hunt, read, embroider, crochet, putting puzzles together, baking and she loved playing games. Her two favorite games were Mexican train and pinochle. Beulah is a member of the Church of Jesus Christ of Latter-day Saints and held many positions throughout her life. She spent her life teaching young women and has held many callings serving as Age Group Counselor in the M.I.A, M.I.A. President, Stake Sports Director, which involved refereeing and umpiring 250 young women, District Camp Director over 10 Stakes and 1300 active girls and Regional Sports Director over 22 Stakes and 2300 young women. She was called by the General Board Sports Committee to instruct them on how to cook over a campfire, which she did by having Willard dig a pit in their back yard. After becoming a District Leader over the Sports and Camp Program she was ask to be in charge of the Camp Cooking Section at June Conference demonstrating camp cooking to 2500 women from all over the world. Beulah was an accomplished genealogist serving on committees teaching genealogy as well as doing the genealogy for the Bundy, Gifford, Pectol and Jolley families. Beulah and Willard together served as Temple Ordinance Workers and went on two full time missions. Beulah also served at the Family History Mission for two years. Beulah is survived by daughters Judy Hoffman and Brenda Sugden (Dale) and many grandchildren, great-grandchildren and great-great grandchildren. She is preceded in death by her parents and 6 siblings, husband Willard Dwight Pectol, daughter Bonnie Pectol, son Willard Joey Pectol, son Winferd (Wink) Pectol, and son Dwight Pectol. Services will be held at 11 a.m. on Saturday, September 22, 2018 in the Washington 4th Ward on 82 North Main St. Washington, Ut. Viewings will be held on Friday, September 21, 2018 at the Washington 4th Ward from 6:00 – 7:00 pm. and Saturday morning at 9:30.

Our beloved mother Beulah Mae Gifford Pectol passed away peacefully in her home on September 11, 2018 at the age of 95. She was born on May 19, 1923 in Mt. Trumbull, AZ to Cyrus and Ina Bundy Gifford. She was the oldest daughter of ten children... View Obituary & Service Information

The family of Beulah Mae Gifford Pectol created this Life Tributes page to make it easy to share your memories.

Send flowers to the Pectol family.