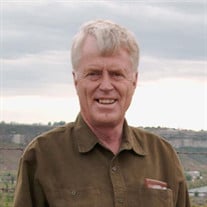 Blain Saunders, age 75, passed away peacefully and painlessly in his home on August 10, 2021. He was born March 30, 1946, in Ogden Utah to Harold and Doris Saunders, the fourth of eight children. He grew up on a dairy farm in Vale Oregon where he attended and graduated from Vale Union High School. Blain served a mission for the LDS Church in England. He married Lynnette Tracy in the LDS Idaho Falls Temple on July 18, 1968. Blain and Lynnette raised six children together. Lynnette passed away July 25, 2000. After being a widower for four years Blain married Christina Hutchings in the LDS Jordan River Temple on December 28, 2004. As a blended family, Blain and Christina, have eleven children, fifty-eight grandchildren, and twenty-four great- grandchildren. Concerning Blain’s character and the way he lived his life, the following applies. “Cowardice is largely predicated upon fear. Don't be cowardly. Don't be fearful. Fear is the opposite of faith. For goodness sake, you're already in the battle! You're already going to be overtaken. The fact of the matter is no one gets out of here alive. Live this life nobly, fearlessly. When you take the wounds that come your way make sure that they come to your front! Don't let them shoot you in the back. Go about your life boldly, nobly, valiantly. Because it is only through valiance in the testimony of Jesus Christ that you can hope to secure anything. Not valiance in your fidelity to anything other than Jesus Christ. The fact of the matter is that faith must be based in Him, and in Him alone.” Blain was a gentle courageous soul who decided to forgo degrees, titles, honors, positions, and his good name among men in this world in order to remain true to the principles of the gospel of Jesus Christ. He took all of the wounds from the front. Blain had a love for the word of the Lord in the scriptures. His knowledge of and obedience to the teachings in the scriptures allowed him to teach and influence the lives of many individuals. He was an avid gardener and created healthy soil through his composting. It was like Christmas whenever a dump load of manure was delivered to his house. During the year battling cancer, he never complained, and he approached every opportunity to treat the cancer, regardless of how challenging, with great positivity and cheerfulness. Even at the last, he was gracious and cheerful to everyone he encountered. The family would like to thank SunTree Hospice for providing comfort to Blain and support to the family during that challenging time. The family would also like to thank Serenity Funeral Home for their tenderness and sensitivity in preparing everything for Blain’s burial. There will be a public Celebration of Life open house from 6 to 7:30 p.m. on Thursday August 19 at the Serenity Funeral Home of Southern Utah 1316 S. 400 E. #A3 St. George, Utah. Starting at 7:30 p.m. it will be family time. There will also be a graveside service and interment at 11:00 a.m. on Saturday August 21 at the Ucon Cemetery in Ucon, Idaho.

Blain Saunders, age 75, passed away peacefully and painlessly in his home on August 10, 2021. He was born March 30, 1946, in Ogden Utah to Harold and Doris Saunders, the fourth of eight children. He grew up on a dairy farm in Vale Oregon where... View Obituary & Service Information

The family of Blain Saunders created this Life Tributes page to make it easy to share your memories.

Send flowers to the Saunders family.