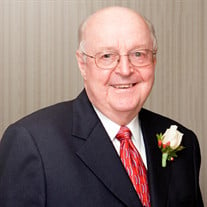 Bob Merrill Harman, 89, peacefully passed his final test on October 9, 2020 in Rexburg, Idaho. He was the oldest child born to Maurice Merrill Harman and Bernice Mathison Harman on July 6, 1931 in Granger, Utah. His childhood was spent working on the family’s farm where he learned how to get the job done right. Bob married his high school sweetheart, Twila Doone Ivie, on September 21, 1950 in the Salt Lake Temple. Four months later he was called to serve a full-time mission for The Church of Jesus Christ of Latter-day Saints in the Western Central States Mission. Later he served his country in the United States Army Medical Corps in Tacoma, Washington. Bob and his brothers, Bud and Michael, expanded the family farm in Riverton to grow hay, tomatoes, sugar beets and grain. They also started a dairy and milked 150 cows where they taught the family and many neighborhood boys the value of hard work. When the suburbs crowded in on them, they sold that farm and he bought a large ranch where he farmed with his sons on the north side near Rupert, Idaho. He continued to pursue his entrepreneurial endeavors where along with his partners founded LandView Fertilizer in 1984. Bobs life was service to his family, which grew to include 5 sons and 1 daughter, and service to others. He served his community on the Minidoka County School Board. He also faithfully served in many Church callings including Bishop, Stake Presidency Counselor and Temple Sealer. With his wife by his side, he served 2 additional missions. In 1992, he was called as the Director of the Mormon Battalion Visitors Center in San Diego, California. They also served together in the Hong Kong Temple where Bob was a sealer from 2001-2003. Later he loved being a sealer in the Twin Falls and St. George Temples. Bob was a kind and gentle man who was loved by many—especially his 32 grandchildren. They loved their grandpa and gathered for Sunday dinners, parties and reunions that kept everyone connected. Every five years he loved taking the family to Disneyland starting with 3 grandchildren and ending up with many grandchildren and great-grandchildren. He loved to have fun with his family but he will also be remembered for his delight in a job well done. His fields were free of weeds, his power poles painted white and his pickup was always clean. Bob was a friend to everyone he met. His hobby was people. He loved them and they loved him back. He would gather with friends and family for his famous McDonald’s breakfast run every morning before running for parts. His parents and his brother, Michael, preceded him in death. He is survived by his wife of 70 years, Twila Harman, and his 6 children, Jack Harman (Shelley) of Rupert, Idaho, Paul Harman (Sue) of Santos, Brazil, Kent Harman (Tami) of St. George, Utah, Cari Eames (Tim) of Rupert, Idaho, Kurt Harman (Robin) of Tetonia, Idaho, and Brent Harman (Kristin) of Park City, Utah along with 32 grandchildren and 51 great-grandchildren. He is also survived by his brother, Bud Harman. Funeral services will be held on Friday, October 16 at 11 AM, at the View Cemetery, 647 E. 600 S. Burley, Idaho with Jacob Harman officiating. (Due to the nature of the outdoor venue and social distancing please bring your own chair) The service will be broadcast on Facebook Live @ “Bob Harman Memorial Service 10/16/20”

The family of Bob Merrill Harman created this Life Tributes page to make it easy to share your memories.

Send flowers to the Harman family.