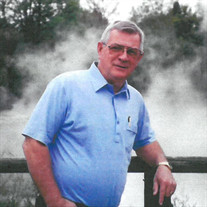 Bobby (Bob) Wayne Webb, 80, of Ivins, Utah passed away on February 22, 2022, after a long illness. Bob was born March 24, 1941, in Great Bend, Kansas to Leonard and Almyra Webb. He grew up in Cheyenne Wells, Colorado, but when he was 15 his family moved to Monticello, Utah where he graduated from high school. He later joined the U.S. Air Force and served for 7 ½ years with time in Vietnam. Bob had a life-log love of fast cars, motorcycles, and golf. He was also a jack of all trades; he could fix anything. Bob worked as a testing coordinator for E.E.S.I. for many years until his retirement in 2016. Bob is survived by his wife of 51 years, Linnea, children, Cynthia Foster, Larry Webb, Douglas Bird, Shelley (Russ) Bawden, five grandchildren, seven greatgrandchildren, and his sister Leona Holingsworth. He was preceded in death by his parents and brothers Leon, Larry, and Gary. A graveside service with military honors will be held at the Ivins City Cemetery on March 24, 2022, at 12:00 p.m. We wish to thank the Southern Utah Veterans Home in Ivins, Utah for all the love and care they gave him for the last 4 ½ years of his life.

The family of Bobby Wayne Webb created this Life Tributes page to make it easy to share your memories.

Send flowers to the Webb family.