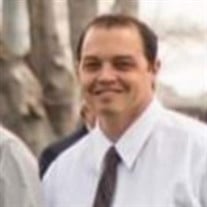 Bradley L. Sanders passed away in his sleep at his home in Cedar City, Utah, on October 12, 2021. Brad was born on March 20, 1987, in St. George, Utah, and was raised in nearby Hurricane, Utah, where his family has pioneer roots. Brad was the fourth son born to David and Arla Sanders, and, like his older brothers, was quite skilled at incrementally testing the patience of his parents with typical small-town mischief, (the nature of which may or may not be disclosed by his older brothers at this time). Brad was diagnosed with Type 1 diabetes in his early teens and struggled with his health as a result. Despite this, he was a hard worker and sought to help those in need around him. Never one for the books, school, and study-- although he did graduate from Millcreek High School--Brad instead enjoyed tinkering, whether it was with small engines, electrical equipment, or cars, and he was a master of "Bradley-rigging" things to work with limited parts or tools available. Brad enjoyed the outdoors, especially fishing, and preferred the peace in the mountains away from the busy shuffle and stress of daily life. When Brad was 7, his youngest brother, David Jr., was born with physical handicaps. Brad helped his little brother get ready for bed when David Jr. was a toddler, helped him learn to walk, and helped with babysitting both David Jr. and his younger sister, Monica. Brad is survived by his fiancé Breanna Collinwood and daughter Alayna Marie Sanders of Cedar City, Utah, and two sons, Braxton Bradley Sanders, and Mikhael Martin Sanders, from a previous marriage to Savanna Collis. Brad is also survived by his parents David and Arla Prisbrey Sanders of Hurricane, Utah, and brothers Trevor (Rachael) of Spanish Fork, Utah; Trenton (Claudia) of West Bountiful, Utah; Wesley (Amy) of Richfield, Utah; David Jr. of Hurricane, Utah; his only sister Monica of Washington, Utah; Grandma Janice Sanders of Hurricane, Utah; 11 nieces and nephews; and numerous aunts, uncles, and cousins. Brad was preceded in death by maternal grandparents, LaDell and Fern Prisbrey, of St. George, Utah; maternal uncle Kelly Jerome Prisbrey; paternal grandfather Mart Lynn Sanders of Hurricane, Utah; and paternal uncle Carl Edward Sanders. A viewing will be held Saturday, October 23, 2021, from 9:00-10:45 AM at the LDS Chapel located at 320 North 3400 West, Hurricane, Utah 84737. The funeral will be held immediately thereafter from 11:00 AM-12:00 PM. The graveside burial service will be at the Hurricane City Cemetery following the funeral. To support Brad's three young children, the "Brad Sanders Memorial Account" has been established at America First Credit Union. Financial donations can be made to this account at Account Number 9121625.

Bradley L. Sanders passed away in his sleep at his home in Cedar City, Utah, on October 12, 2021. Brad was born on March 20, 1987, in St. George, Utah, and was raised in nearby Hurricane, Utah, where his family has pioneer roots. Brad was... View Obituary & Service Information

The family of Bradley LaDell Sanders created this Life Tributes page to make it easy to share your memories.

Bradley L. Sanders passed away in his sleep at his home in Cedar...

Send flowers to the Sanders family.