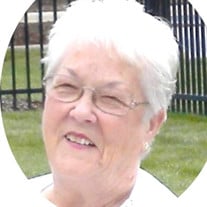 Carol Silver Kerbs Nowlin, died February 21, 2021 in St. George, UT. She was born on July 27, 1933 to Clifton Meredith and Lena Reed Silver, in Salt Lake City Utah. A young child during the depression years, she moved with her family to Sacramento, California as her father sought work. She met with difficult financial circumstances during most of her life. Despite the many challenges she experienced, Carol remained full of faith in her Savior and the Church of Jesus Christ of Latter-day Saints. Carol met Ray Kerbs on New Year’s Eve 1947. They married on September 23, 1950 and had three sons, Clifton Ray in 1955, Brian Keith in 1958, and Alan Silver in 1960. Some of her favorite memories were of birthing her babies. Married to a military man, she lived in many different places, including two years in the Philippines, where she met wonderful people and learned many things. In 1976, after 26 years of marriage, Carol and Ray divorced. Over the next years, she worked at a variety of jobs, eventually settling at the University of Phoenix in Arizona. Living on her own, with her children grown and gone, she earned her bachelors degree there in 1993. Everyone who knows Carol knows she loves hot air balloons. She had the opportunity to go up twice, once on her 60th birthday and once to celebrate retirement. Carol also loved to travel and went on many trips and cruises. On her limited budget, she saved and planned and always paid in advance. She was “widely traveled with jewels on every finger”. She loved to learn and she loved to laugh. She had a special knack with children and thoroughly enjoyed her grandchildren. Carol was blessed with a late-life marriage that brought her much joy. She married Howard (Lucky) Nowlin December 12, 2009. They were sealed in the Raleigh-Durham temple on July 31, 2010; and her two oldest sons were sealed to them. They were happily married for over seven years, until his death in 2017. At the time of her death, she was living at Sterling Court Assisted Living in St. George, Utah, where she and Lucky moved in 2015. She was very involved in their social activities and service projects. She had sweet relationships among the residents and especially among the staff. She always encouraged faith and staying close to the church. Carol is preceded in death by her parents and her two brothers-in law. She is survived by her two sisters, Nancy (Clyde Needham) and Jan (Steve Jackson); her three sons, Cliff Kerbs (Diane), Brian Kerbs (Nancy), and Alan Kerbs (Connie); 67 grand children and great grandchildren and more on the way. On her deathbed, she promised her youngest granddaughter that she will meet her future kids and send them down to her (and also pick out good ones). That granddaughter plans to hold her to it! We love you! Fly high! Funeral services will be held Friday, February 26, 2021 at 2:00 p.m. at Serenity Funeral Home of Southern Utah, 1316 S. 400 E., St. George, UT. A visitation will be held from 1:00 – 1:45 also at the funeral home. Interment will take place at the Tonaquint Cemetery. The funeral services will be live streamed via Zoom https://zoom.us/j/91695394126?pwd=NWYwcnlDMThjVUQ3TDlvNWtNUG1Fdz09 Meeting ID: 916 9539 4126 Passcode: 711107 Family and friends are invited to share tributes online at www.SerenityStG.com. Arrangements are under the direction of Serenity Funeral Home of Southern Utah, 986-9100.

Carol Silver Kerbs Nowlin, died February 21, 2021 in St. George, UT. She was born on July 27, 1933 to Clifton Meredith and Lena Reed Silver, in Salt Lake City Utah. A young child during the depression years, she moved with her family to Sacramento,... View Obituary & Service Information

The family of Carol Silver Kerbs Nowlin created this Life Tributes page to make it easy to share your memories.

Send flowers to the Nowlin family.