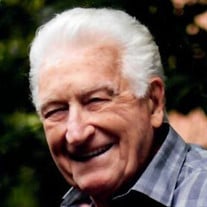 St. George, UT Charles LeRoy Blackman age 91 died peacefully at DRMC on April 21, 2018. Charles was born to Iva May Jones and Benjamin Franklin Blackman on May 3, 1926 at Grand Junction, Colorado. His brother Austin Theodore was 11 years older. He was enlisted in the Army from 1944-1946. He was stationed on Oahu, Hawaii as the personal chauffeur of General Hull. He married Clara Olene Cole on September 28, 1947 in Rifle, Colorado. Charles was raised in Silt and Rifle, Colorado where he attended school and graduated from Rifle High. He has lived in Colorado, Missouri, and Utah. He was a long line driver for Rio-Grand and Time-DC for 35 years. As a young man he loved hunting and fishing. In later years he loved reading and telling a good story, gardening, and bird watching. After Olene's death, Charles married Virginia Mann from Santaquin, UT on September 26th, 2009. Charles was a member of The Church of Jesus Christ of Latter-Day Saints. He served as a counselor in the Bishopric, Cub Master, and Temple ordinance worker. Charles is survived by his wife Virginia, and his 3 children; Donna Lee Anderson of St. George, UT, Vicki Sue (John) Rothstein of Mobridge, SD, and Charles Craig Blackman of Hickory, NC. Eight Grandchildren, and 14 great-grandchildren. Charles was loved and respected by all who knew him. His cheerful demeanor made everyone he met feel at ease. Funeral Services will be held April 27, 2018 at Snow Canyon 13th ward at 1610 N Dixie Downs Rd. St. George, UT. A viewing will be held at 10:00am and services at 11:00am. Internment will follow at Tonaquint Cemetery with military honors.

The family of Charles LeRoy Blackman created this Life Tributes page to make it easy to share your memories.

Send flowers to the Blackman family.