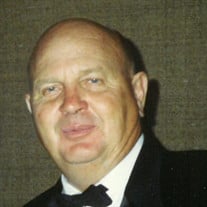 Charles Robert “Bob” Bledsoe, our dear husband, father, grand and great grandfather, passed away peacefully on Saturday November 9, 2019 at his home in Washington, UT, with his beloved bride of 65 years by his side. Bob was born on February 13, 1935 to Charles J. and Dorothy Bledsoe in St. George, UT. At age 3, he moved to Compton, CA, where he spent his childhood. He graduated from Compton High School in 1953, where he had been the junior class president and a member of the football team. A life-long member of the Church of Jesus Christ of Latter-day Saints, he met Donna Jean Anderson at a church youth activity in 1952. It was love at first sight, at least for him. In time he won her heart, and they were sealed for time and eternity at the St. George Temple on September 7, 1954. Nine months later, their first child arrived. And by 1968, they were the parents of ten children, nine boys and one girl. Bob sacrificed his dream of a college education to support is burgeoning family, often working two full-time jobs concurrently. Among his many vocations, he worked as a door-to-door salesman, milkman, railroad switchman, firefighter, building contractor, building materials salesman, and insurance agent. After leaving Compton in 1959, Bob’s various jobs led him to reside in Anaheim, Huntington Beach, Agoura, Fountain Valley, Wrightwood, south Orange County, and north San Diego County, CA; Omaha, NE; and finally, Washington, UT; where he and Donna lived for the last 15 years of his life. He made many friends wherever he went with his quick wit and irreverent sense of humor. He also spent countless hours on the phone rekindling old friendships. Bob loved football, and passed this love down to his sons. For nearly two decades, fall Friday nights were reserved for their high school games. No one can remember his ever missing any of his sons’ football games … or his daughter’s violin performances. Bob had a deep testimony of the Gospel of Jesus Christ, but he was not a scriptorian or a milquetoast Bible-thumper. He was a solid, down-to-earth man of faith and integrity. And he was a great member missionary and touched countless lives. He invited two of his high school friends to attend church and play on the ward basketball team with him, and both of them joined the church. All three remained life-long friends. Later, his rough play on the basketball court impressed a fellow firefighter, who joined the church in part because he appreciated the fact that the LDS men he knew were “manly” men. As a child raised during World War II, Bob was deeply patriotic and believed strongly in the principles embodied in the United States Constitution. He could often be found awake several hours before dawn studying the Federalist Papers or other writings of the Founding Fathers. George S. Patton, the no-nonsense American World War II general, was one of his greatest heroes. Although tough on the exterior, he was tender and compassionate at the core. And he adored his beloved wife Donna. He always maintained that the best decision he ever made was to marry her. Bob was preceded in death by his parents, and his son Robert Gene. He is survived by his wife Donna; his brother Mike (Cathy); his daughter Linda; his sons Robert Dean (Denelle), John (Debra), David, Dennis (Kendall), Steven (Miriam), Carey (Lisa), Jim (Angie), and Scott (Marja); and by 40 grandchildren and 36 great-grandchildren. A viewing will be held at 9 a.m. on Saturday November 23, 2019 at the LDS Meetinghouse at 3167 E. 1140 South, Washington, UT. Funeral services will follow at 11 a.m. Interment will take place immediately thereafter at the Washington City Cemetery. Condolences may be shared with the family at www.serenitystg.com. Services are under the direction of Serenity Funeral Home of Southern Utah.

Charles Robert &#8220;Bob&#8221; Bledsoe, our dear husband, father, grand and great grandfather, passed away peacefully on Saturday November 9, 2019 at his home in Washington, UT, with his beloved bride of 65 years by his side. Bob was born... View Obituary & Service Information

The family of Charles Robert "Bob" Bledsoe created this Life Tributes page to make it easy to share your memories.

Send flowers to the Bledsoe family.