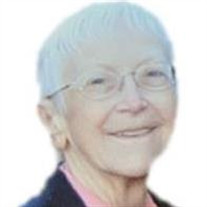 Christena Cox Wood passed away peacefully in the home of her granddaughter, Christie Jensen, on Thursday, January 31, 2019 after a long struggle with Alzheimer’s. She was born June 9, 1942 in St. George, Utah to W. Malin and LaVerne Pickett DeSwan Cox. She grew up in St. George and spent summers in Pine Valley. Christie graduated from Dixie High School where she excelled in academics. She received several awards including the Bausch and Lomb science award for the state of Utah, the Betty Crocker Homemaker of the Year, the Make It With Wool award for the State of Utah, and the outstanding senior class student. In 1960 she married Gailon “Buddy” Shaw. The marriage was blessed with a daughter, Christena. Christie and her daughter returned to St. George in 1976 following her divorce from Buddy. In 1983 she married Leonard Wood. They were married until his passing in 1986. Christie was an excellent business woman. She worked for several years as the executive secretary for the president of Wycon Chemicals. After her return to St. George, she worked as a legal secretary for the law firm of Allen, Thompson, & Hughes. In 1993 Christie went to work for the county attorney’s office as a paralegal. She remained there until her retirement in 2009. Throughout her professional life she served in several civic organizations including the Republican Women’s Organization and the Business and Professional Women’s Organization. Christie was a faithful and devoted member of the Church of Jesus Christ of Latter-day Saints and served in many callings. She especially enjoyed working with the youth in the Primary. Christie is remembered as a loving devoted mother, grandmother, daughter, sister, and friend. Christie is survived by her daughter, Christena Hunt, her grandchildren, Nathan (Rachel) Hunt, Christie (Andy) Jensen, Lizzie Hunt, Katie (Dominick) Guidino, Joseph Hunt, and Adam Hunt; two great-grandchildren, Carter Jensen and Sammy Hunt; and her sisters and brothers, Norlene DeSwan Stephens, Dorothy DeSwan (Clark) McMullin, Douglas (Linda) Cox, and Carma Rae Cox Maggard, and Thomas Fayer, along with many nieces and nephews. She was proceeded in death by her parents, her sister, Renee DeSwan Fayer , and a grandson, Kason Hunt. The family would like to express their appreciation to Zion’s Way Hospice for their dedicated and compassionate care during Christie’s final days, Thank you DeAnn, Victoria, and Dr. Esplin! Funeral services will be held on Saturday, February 9, 2019 in the 8th Ward Chapel of the Church of Jesus Christ of Latter-day Saints, 163 S. Main Street. There will be a visitation at 10:00 am in the Relief Society room, followed by the funeral service at 11:00 am in the chapel. Mortuary and cremation services were provided by Serenity Funeral Home. Family and friends are invited to share condolences online at: www.SerenityStG.com.

Christena Cox Wood passed away peacefully in the home of her granddaughter, Christie Jensen, on Thursday, January 31, 2019 after a long struggle with Alzheimer&#8217;s. She was born June 9, 1942 in St. George, Utah to W. Malin and LaVerne Pickett... View Obituary & Service Information

The family of Christena Cox Wood created this Life Tributes page to make it easy to share your memories.

Christena Cox Wood passed away peacefully in the home of her...

Send flowers to the Wood family.