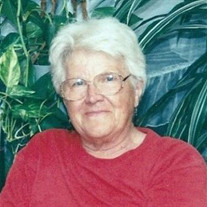 Clara Elizabeth Ruesch was born on September 20, 1925 to Howard and Susan Crawford Ruesch in her grandmother’s home in Oak Creek in what is now Zion National Park. She was their first daughter and was the first granddaughter to be born to both sets of her grandparents. She lived in Oak Creek until 1930, when her family moved into Springdale. The little cabin the family had lived in at Oak Creek was actually moved to Springdale. They lived in it until the Rock House in Springdale was finished in 1936. The little cabin later became the home of Harmon and Sadie Ruesch. Clara attended elementary school in Springdale. She remembers that her first grade teacher was Mrs. Miles. During that time, Clara’s family spent their summers on East Zion where their family had a homestead. When Clara started 8th grade, the family decided to stay in East Zion during the winter and they drove the children to Orderville each day to go to school. After that year, Clara and her mother and sisters moved back to Springdale, while Howard and the boys stayed to work on the mountain. Those early years were very hard for the Ruesch family. It was during the Great Depression and there was little work available for her Dad. Clara remembers one Christmas the children were so excited to get some fresh oranges from their Aunt Elsa and Uncle Calvin because their family had not been able to afford any Christmas presents that year. A fond memory of her childhood is the whole family going to Grandma Crawford’s home every Sunday and Christmas. The children always had a Christmas competition with their Uncle Newel to see who could say Merry Christmas first when they got to Grandma’s house and he always won. Clara graduated from Hurricane High School in 1943. After graduation, she worked at the Zion Inn cafeteria. After it closed for the winter, she and 3 other friends went to Cheyenne, Wyoming where they worked at the Union Pacific Beanery. In the spring of 1944, Clara went to California for her Aunt Iona’s wedding. She went to work in a lemon packaging plant, where she was a sorter. She actually lived with her other aunt, Rowena in Claremont, California. She had an appendectomy on June 7, the day of the Normandy Beach invasion. She went back to Springdale to recover, and then worked at Zion and Bryce Inns that summer. Later that year, she went to stay with her Aunt Verda for a few months in Laughton, Oklahoma to help her with her new baby, Beverly, while Uncle Duane was at Fort Sill. Clara worked as a waitress in a restaurant while she was there. From there, she went to Texas to stay for a while. In 1945, she went back to Springdale and went to work at the Zion Inn again. There she met a young man, Grant Cope who had just returned from Hawaii, where he had been stationed during World War II. They married on May 3, 1946 and lived in Cabin #1 at Zion Inn in that summer. That fall, they transferred to Sun Valley, Idaho and continued to work for the Union Pacific corporation. Grant cooked, and later became the Chef at Sun Valley Challenger Inn. Clara worked as a cashier and waitress at the Challenger Inn, the Roundhouse, and the Duchin Room until their first daughter, Claire Linn was born. After that, Clara worked hard as the mother of six children, Linn, Bryan, Loya, Vicki, Fay, and Francis. The family lived in Ketchum, Idaho. She was very active in the LDS church there and spent much of her time helping their branch in Primary, Sunday School, Relief Society, and baking bread and making bazaar items to help raise money for their welfare assessment. Twenty years after leaving Zion Inn, the Cope family returned to Zion National Park in 1966, where Clara and Grant once more worked at the Inn and ended up in Cabin #1. Grant was the Chef at Zion Inn and Clara worked in housekeeping at Zion Lodge. A big surprise for the family that year was the birth of a final son, Darren in October. For the next 20 more years, Clara worked at Zion Lodge, (with two years in Grand Canyon Lodge) as the Housekeeper, Baker and as a Postal Clerk. ¬Sometimes they lived in the cabins at the Inn, sometimes at the Lodge. When the cabins were torn down at Zion Inn in 1968, the family moved to Hurricane for a few months until they moved into a park service home in the Watchman residential area in 1969. In the Christmas holiday of 1974, the family moved into Clara’s current home in Springdale on property owned by Clara’s Aunt Lucy Schiefer. Grant died in April of 1988, leaving Clara as a widow. In 1990, she took a Color County tour across the US and even into Canada. She visited Nauvoo, Kirtland, Boston and Sharon, Vermont and many other historical US and LDS Church sites. She lived alone until her daughter Loya came to live with her in 2002. Clara had her 90th birthday party in September of 2015. She has outlived two of her children, Bryan and Fay. She has 10 grandchildren and 12 great-grandchildren, three step great grandchildren, one great-great step-granddaughter, and another great-grandchild on the way. She has remained a faithful member of the LDS Church her whole life. She is thankful for all the ward and family members who help her and watch out for her.

Clara Elizabeth Ruesch was born on September 20, 1925 to Howard and Susan Crawford Ruesch in her grandmother&#8217;s home in Oak Creek in what is now Zion National Park. She was their first daughter and was the first granddaughter to be born... View Obituary & Service Information

The family of Clara Elizabeth Cope created this Life Tributes page to make it easy to share your memories.

Send flowers to the Cope family.