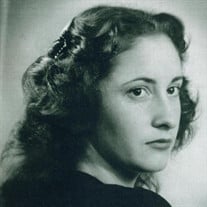 Cleone Johnson Rowley left this life peacefully at home March 26, 2020. She was born September 16, 1929 in the Iron County Hospital to Ivan and Orna Gillies Johnson of Parowan, Utah. As a young girl, Cleone worked side by side with her mother and three generations of her grandmothers operating the Paxton Hotel on the corner of Main and Center Street. She was bright and interested in many things. During her school years she excelled in math, science and language and made lifelong friends. She also enjoyed music. At the age of 16, she sang a solo in Parowan’s first Christmas Cantata. After graduating from Parowan High School, she attended BYU in Provo where she became better acquainted with a young man from her hometown, Robert Alvin (Bob) Rowley. They were married January 24, 1948. After Bob’s graduation, they made their home in Parowan where they welcomed eight children into their hearts and home. By example, they instilled in their children a deep and broad curiosity, a sense of loving kindness and an appreciation of music. Her children have fond memories of their mom at the piano playing songs from Rachmaninoff, Debussy, Ravel and the beautiful melodies of her era. Later in life, Cleone and Bob’s marriage ended, but their love and support of their children and grandchildren carried on. The following tribute written by Cleone’s grandchild, Jessica, paints a fitting portrait of her life and influence on those around her. “Grandma was a unique woman who lived in the small town of Parowan, Utah. She was an avid reader with a love for the universe. I grew up with her showing me things beyond the earth through her telescope. Her walls were adorned with photos of galaxies. She was a skilled seamstress who made draperies as a profession, along with being the town librarian for years. I watched a lot of fashion shows on tv with her as a child. She would give me a penny for each pin I picked up in her sewing rooms. Then she would take me to a little shop where I would buy paper dolls. She always had astronomy magazines and many books around. I read Gulag Archipelago as a tween after seeing it in her room. Her nails were always done up in red, and I loved her sleek, dark hair. One of my earliest memories is hearing her sing Mares Eat Oats to help me fall asleep at nap time. So many things have changed in my 47-year life, but up until this morning my Grandma Rowley in that beloved, memory filled house is the one and only thing I can think of that had stayed constant. I cherish how steady and sweet she was for me and all the love she gave.” Many in the community came to know her as she served them in the Parowan Library. She found great joy in personally matching books to readers. Cleone is survived by her loving sister, Lola Ann (Claude) Jones and by her children Robert Alan (Kathryn) Rowley, Guy James Rowley, Lorraine (Mike) Thompson, Russell J (Kathleen) Rowley, and Lynna Kaye Rowley. She is also survived by 23 grandchildren, 55 great grandchildren and 5 great, great grandchildren. Preceding her in death are her siblings Carlyle G (Marie) Johnson and Ida Eleen Evans and Cleone’s children Richard Johnson Rowley, Ryan Gage Rowley and Laurel Ann Rowley. Interment will be in the beautiful Parowan Cemetery beside her three children. A family memorial will be held to honor her life at a later date due to Corona virus restrictions. Thank you to her caregivers Brad Hainey, Lynette Mangold, Iron County Home Health, Sun Tree Hospice and all who have loved and cared for her.

Cleone Johnson Rowley left this life peacefully at home March 26, 2020. She was born September 16, 1929 in the Iron County Hospital to Ivan and Orna Gillies Johnson of Parowan, Utah. As a young girl, Cleone worked side by side with her mother... View Obituary & Service Information

The family of Cleone Johnson Rowley created this Life Tributes page to make it easy to share your memories.

Send flowers to the Rowley family.