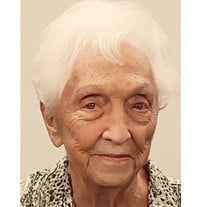 Coy Camille Blackburn Humphrey passed away on April 25, 2019. Camille was born in Salina, Utah on January 7, 1929. She was the only child of Myrtle Jeffery and Wilford Ray Blackburn. When Camille was two-and-a-half years old, her father died. Her mother, Myrtle, married Wilford Rasmussen, giving her brothers, Lowell, Philo, Ellis, Rodney, Kay and a sister, LaRee. Camille grew up in Redmond attending school at Redmond Elementary, Salina Junior High School and graduated from North Sevier High School. Camille married Nyles Larson Humphrey, from Salina, on Christmas Day 1946 in Redmond. She was sealed to Nyles, her eternal companion, in the Saint George LDS Temple December 27, 2002. She and Nyles supported one another in their college studies. Camille graduated from the LDS School of Nursing. Nyles graduated from Utah State University in Range Management and Forestry. Nyles' employment with the Bureau of Land Management took Camille and their five children from their hometowns to Cedar City, Logan, Salt Lake City, Monticello, Price, and Fillmore, UT; Malta, MT; Washington, DC; and Cheyenne, WY. Camille worked as a floor and surgery nurse in Salt Lake City, Price, Fillmore, Malta and Cheyenne hospitals. She worked as a cardio vascular nurse in Springfield, VA. After retiring from Nursing, Camille was a Real Estate agent for ERA Realty in Cheyenne, WY for 20 years. Saint George, UT became her home in 2001. She enjoyed living in the warm climate and the company of her many supportive friends. In retirement, Camille continued to enjoy sewing, quilting, playing the piano and organ, growing flowers, taking care of the inside and outside of her home and entertaining her family and friends. She was an active member of the Church of Jesus Christ of Latter-day Saints. Camille is survived by her children: Rex (Kathy) Humphrey, Bonney Lake, WA; Robin (Mark) Shepherd, Broomfield, CO; Randa (Vern) Gill, Phoenix, AZ; and Jeff Humphrey, Dillon, MT; 11 grandchildren, 14 great grandchildren and many nieces and nephews. She was preceded in death by her husband Nyles in 2001, her oldest son, Nyles in 2013 and one great granddaughter. Graveside services will be held at the Eastside Cemetery in Salina, UT at 10:00 on Friday morning, May 24, 2019.

Coy Camille Blackburn Humphrey passed away on April 25, 2019. Camille was born in Salina, Utah on January 7, 1929. She was the only child of Myrtle Jeffery and Wilford Ray Blackburn. When Camille was two-and-a-half years old, her father died.... View Obituary & Service Information

The family of Coy Camille Humphrey created this Life Tributes page to make it easy to share your memories.

Send flowers to the Humphrey family.