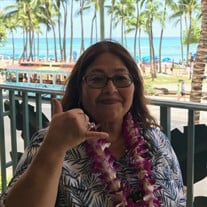 Our Dear Sweet Mamita, Dalila Janet Rodiguez, passed from this earthly existence to the arms of her Heavenly Father on December 8th, 2020 in St. George Utah. Dalila was born March 29, 1955 in Guayaquil, Ecuador to Carlos Augusto Zeballos and Alejandrina Maria Nivela She was raised in Guayaquil and started her family there. She raised 3 beautiful children - Mayfer, Armando and Karla. Dalila left Ecuador with her family and came to the United States in 1991 to give her children the opportunity of a better and more fulfilling life. Dalila’s sole purpose and legacy in life was raising and taking care of her kids and grandkids. They were the light of her life. Cooking meals every day for them, throwing amazing fun Birthday parties and spending one on one time with them were just a few of her joys. No matter what youwanted to do, you knew Mamita would want to be a part of it, from Camping and Hiking to amusement parks or riding in the boat or the razor, she was always up for an adventure. Making wonderful memories with her children was what it was all about. Her children's friends were her friends also and they all loved her. They all knew if they were coming to Mamita’s they would be eating and having fun. Her passion in life was cooking. She loved to cook for everyone, especially her family and friends. One of her favorite things to do was when we would go out to eat with her and we found something we liked she would taste it and figure out what was in it and in no time at all we would be having it at home - Mamita Style. You also knew at Christmas time you would be getting some of her famous Ecuadorian Fruit cake that she gave to all her family and friends. Dalila was a devout member of The Church of Jesus Christ of Latter-day Saints. Her faith and devotion with her Heavenly Father she instilled in all her children and grandchildren. She served in many callings within the church both in Primary, Sunday School and Relief Society. She also had the privilege of working for the church in the St George LDS Temple as a cook in the cafeteria. Her time there was filled with great memories. Mamita was a friend to all who knew her and will be missed by many. She is survived by her Mother, Alejandrina of Guayaquil Ecuador. Children: Mayfer & John John Velasquez-Valdez of Las Vegas, NV, Amando & Curtis Wright-Valdez and Karla & Justin Abbott, all of St George, UT. Her beautiful grandchildren: Jorge, Leonardo, Jesse, Blake, Maddison, Audrey and Swayze. Two Brothers and one sister: Carlos Zeballos, Jaun Carlos Zeballos and Grace Mery Zeballos. She is preceded in death by her father, Carlos. A sister Angela Maria Zeballos and brother Cesar Zeballos. May the Lord hold you in his loving arms till we meet again. Funeral Services will be held in St. George, UT on December 12th, 2020 at 2 pm at the Serenity Funeral Home of Southern Utah. A private family viewing will held be from 12 – 1 pm with a public viewing starting at 1pm until the time of the service. The Family would like to give a special Thank You to the Doctors, Nurses and Staff of the DRMC ICU Unit for the loving, tender, compassionate, care given to Dalila. Zoom link for Live Streaming of Funeral Service. https://zoom.us/j/95097471777?pwd=SFVhVHVKNEJIc3M5QXNEeklvMEpiUT09 Meeting ID: 950 9747 1777 Passcode: 930062

Our Dear Sweet Mamita, Dalila Janet Rodiguez, passed from this earthly existence to the arms of her Heavenly Father on December 8th, 2020 in St. George Utah. Dalila was born March 29, 1955 in Guayaquil, Ecuador to Carlos Augusto Zeballos and... View Obituary & Service Information

The family of Dalila Janet Rodriguez created this Life Tributes page to make it easy to share your memories.

Our Dear Sweet Mamita, Dalila Janet Rodiguez, passed from this...

Send flowers to the Rodriguez family.