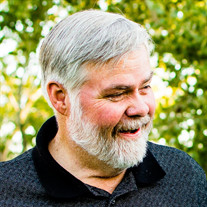 Daniel H. Kitchel, age 64, passed away peacefully at home surrounded by his family on May 5, 2019 after a difficult battle with ALS. Dan was born in Los Angeles County, CA on April 26, 1955 to Judith Freeman and Harold Kitchel. He grew up in southern California with his three younger brothers, and later met two younger sisters. At the age of 17, during the Vietnam War, he joined the U.S. Navy. During his service, while in Japan, Dan was introduced and baptized into the Church of Jesus Christ of Latter-Day Saints. After returning home at the age of 20, he moved to Salt Lake City, UT, where he met his then future wife, Barbara Isom. They were married for time and all eternity in the St. George, UT temple April 9, 1977. As a faithful member of the church, he enjoyed serving as Sunday school president, teacher in the priesthood quorum, and also as a leader in the scouting program. He loved camping and hiking with both the scouts/son and his family. He enjoyed movies, Star Trek, and military planes and ships. He had a deep affection for his family and was a loving and attentive grandfather who always made certain there was a stash of gummy bears for his grandkids. Dan is survived by his wife, Barbara Kitchel; his children, Vera (Mundy) Dutton, Camilla (Kirk) Wall, Daniel (Megan) Kitchel, and Amanda (Jammie) Kitchel/Martinez; his 14 grandchildren; his brothers, Joe (Mary) Kitchel, and Derek Gilbert; and sisters, June and Ilene. He is preceded in death by his grandparents, mother and father, and his brother Austin Kitchel. Funeral services will be held Friday May 10th, 11:00am at the Hurricane 7th ward chapel located at 155 E. 1050 N., Hurricane, UT 84737. Viewing to be held 9:00am-11:00am. Burial will follow the funeral at the Hurricane City Cemetery. In lieu of flowers the family asks that donations be made to a fundraiser in his memory, set up under DAN KITCHEL benefiting the ALS Association. To donate visit ALSACO.ORG.

Daniel H. Kitchel, age 64, passed away peacefully at home surrounded by his family on May 5, 2019 after a difficult battle with ALS. Dan was born in Los Angeles County, CA on April 26, 1955 to Judith Freeman and Harold Kitchel. He grew up in... View Obituary & Service Information

The family of Daniel H Kitchel created this Life Tributes page to make it easy to share your memories.

Send flowers to the Kitchel family.