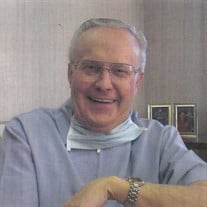 Dan R. Sorensen, beloved husband of Donna Mae Sorensen, passed away peacefully at home in his sleep on April 2, 2022. As well as his wife, Donna Mae, he will be greatly missed by his two daughters, Valerie Joy Connell, Lynnette Sorensen (Greg Collins), and his son Daniel Lee Sorensen. His Grandsons, Lindsay Stout, Daniel William Sorensen, and Isaac Sorensen, and two Great Grandsons Luca, and Lane Stout will miss their special Grandpa (Poppa). Dan is also survived by a very large extended family, and many friends. Dan is predeceased by his wife Barbara Marie Lee. Dan was Born in Driggs, Idaho, and raised in Alta Wyoming. After graduation from High School, he attended College in Logan, Rexburg, and Provo. He served a mission in South Africa, and on his return complete his degree in accounting. After marrying Barbara, he pursued his passion and went back to University in St. Louis Mo., to graduate in Dentistry. Dan moved to Calgary Alberta, Canada to open his practice. He lived in Calgary for 45 years, and still called it home. Dan was a skilled, generous, and even inventive Dentist. He has been missed terribly by both his staff, and patients since he retired. Dan treasured every single day of his life and lit up a room. Every single day he spread his joy to others, and always hummed happy tunes as he carried on with his day. He was very social and stayed in touch with his many, many friends. Dan was an example of pure service, never having a conversation in which he didn’t ask what he could do for you. Dan loved his time in South Africa and talked about it often. His family was his top priority, and he made that very clear with his exemplary love and care of his wife, children and grandchildren. Services will be held at the Alta Wyoming Cemetery, in Alta Wyoming on Saturday April 9th at 12:00 p.m.

Dan R. Sorensen, beloved husband of Donna Mae Sorensen, passed away peacefully at home in his sleep on April 2, 2022. As well as his wife, Donna Mae, he will be greatly missed by his two daughters, Valerie Joy Connell, Lynnette Sorensen (Greg... View Obituary & Service Information

The family of Daniel Ray Sorensen created this Life Tributes page to make it easy to share your memories.

Send flowers to the Sorensen family.