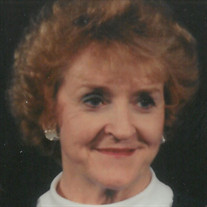 ST. George, UT — LaVerda Darlene S. Nelson, age 88, passed away on Monday, December 16, 2019, in St. George, Utah. Born September 23, 1931 in Midway, Utah, she was the first child of Ephraim Clinton Swain and Rachel LaVerda Hair Swain. On February 11, 1954, she married the love of her life, Joseph Ray Nelson, in the Salt Lake Temple. Darlene’s early childhood years were spent in Midway, before she moved with her family to Bountiful, Utah. She was attending Brigham Young University, when she met her husband, J.R. Together, they raised their family in Bountiful Utah, until they decided to change their view of snow-covered peaks for the brilliant red cliffs surrounding St. George, Utah. After retiring as a manager for Mountain Bell (now known as CenturyLink), Darlene became actively involved in The Daughters of the Utah Pioneers, Bountiful Soroptimists, and as a real estate agent for Wardley Better Homes and Gardens. Her passion was oil painting and interior decorating. She was a visionary, always able to see a project “completed” before beginning. Unfortunately, twenty years ago, she suffered a stroke that altered her physical abilities, but never her optimistic view of life. Her bright blue eyes never lost their sparkle, nor did her gentle smile fade. She was an inspiration to everyone, embracing whatever challenge she faced with courage and kindness. On December 16th, Darlene broke the chains holding her back in her earthly existence. Singing and dancing through the veil with her husband, she joyfully returned to the loving arms of her Father in Heaven. An angel returning “home”. Darlene is survived by her children: Joelene (Steve) Coleman, St. George, Utah; Shawn (Julie) Nelson, Salt Lake City, Utah; Kim Nelson, Port Washington, New York; and Darren (Michelle) Nelson, Bountiful, Utah. She is also survived by her eight grandchildren: Michelle (Casey) Buxton, Chad (DaniKa) Coleman, Brad (Christie) Coleman, Brian Coleman, Tyler Nelson, Lane (Rachel) Nelson, Spencer Nelson, and Abbigayle Nelson, as well as eleven great-grandchildren. Darlene is also survived by her siblings, Arlin (Marsha) Swain, Bountiful, Utah; Gerald (Coleen) Swain, Fullerton, California, and Carolyn (Joe Dean) Secrist of West Bountiful, Utah. She is preceded in death by her husband, Joseph Ray Nelson, and her parents, Ephraim Clinton Swain and Rachel LaVerda Hair Swain. The family would like express gratitude to the many caregivers at The Meadows Assisted Living Center, Red Cliffs Rehabilitation Center, and Zions Way Hospice Service for their compassion and service. A funeral will be held Friday, January 3rd at 11:30 AM, at the LDS Bountiful Utah Stone Creek Stake Center, located at 990 North Chapel Drive, Bountiful Utah. There will be a viewing from 10:00 AM to 11:00 AM in the Relief Society room of the chapel. Interment will be at the Bountiful City Cemetery, under the direction of Serenity Funeral Home of Southern Utah.

The family of Darlene S. Nelson created this Life Tributes page to make it easy to share your memories.

Send flowers to the Nelson family.