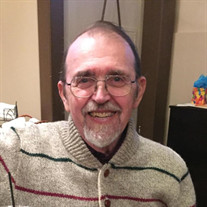 Darwin J. Wimer, 76, passed away on October 26, 2021, in St. George, UT. He was born August 28, 1945, in Dubuque, Iowa to James Darwin Wimer and Anna Mae Wimer (Tigges). Darwin married Sharon M. Wimer (Abbott) in New York State on August 13th. Dar was raised in Dubuque, Iowa with his sisters and brother. After graduating from high school, he enrolled at Loras College and then enlisted in the Air Force on August 11, 1965. Dar was stationed in San Antonio, TX, Monterey, CA, and Berlin, Germany for many years before finally being stationed at Ft. Meade, Maryland and eventually retiring from the military on August 31, 1985. After retiring from the Air Force with 20+ years of service, he graduated from University of Maryland, Baltimore Campus with his bachelor’s degree in Computer Science. He then worked as a Computer Operator for many years before retiring from Alpha-pharma and moving to Mesquite, NV to relax and enjoy the remainder of his years. Dar’s passion was bowling and for anyone who knew him, they would agree bowling was his life. Dar bowled on the Military Travel League in Europe from 1970 to 1982. He won several titles both singularly and with his teams. Once he moved to Maryland, he continued his bowling career by winning State Championship Doubles and was inducted into the Greater Baltimore Hall of Fame in 2008. Once he moved to Mesquite, he continued his bowling career in Nevada and won many awards with his bowling family, including Military Tournaments, USBC Open Championships for Nevada State, Seniors Tournaments, High-Roller Tournaments, and Master’s Tournaments. Over his lifetime Dar’s bowling history (1998 to 2020) includes 59 USBC Achievements as well as bowling 15 – 300 games and 2 – 800 series. He was preceded in death by his wife Sharon M. Wimer (Abbott); his father James D. Wimer; his sister Marilyn Wimer; and his grandson, Donald F. Eisenhart. He is survived by his children, Darwin J. Wimer Jr. and Kimberly M. Eisenhart; Mother, Anna Mae Wimer; sisters, Joyce Lucas, Karen Behr, Linda Reisdorf, and brother, Darryl Wimer. He is survived by two grandchildren and 2 great grandchildren as well as numerous cousins. Memorial Services will be held Saturday, November 6, at 11:00am at the Marilyn Redd Park, 251 Marilyn PKWY, Mesquite, NV. Military honors provided by Nellis Air Force Base Honor Guard. Family and friends are invited to share tributes online at www.SerenityStG.com. Arrangements and memorial tree planting by Serenity Funeral Home of Southern Utah, 435-986-9100.

The family of Darwin J Wimer created this Life Tributes page to make it easy to share your memories.

Send flowers to the Wimer family.