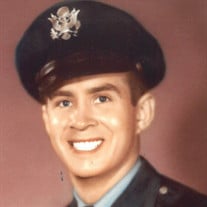 Daryl Rasmussen Halterman, age 94, passed away on Saturday, December 14, 2019, in Cedar City, UT, after a long and fulfilling life, with his loving wife and family by his side. Daryl was born March 18, 1925, to Robert Lee and Bertha Butella Rasmussen Halterman in Parowan, UT. He married Wilma Koch and at the time of her passing in 2004 they had been married for fifty years. After a sixty three year separation he reacquainted with his high school sweetheart, Katherine (Katie) Mitchell and on December 22, 2007 they were married in Shalimar, Florida, where he resided. After marrying they chose to come back to Parowan to make their home together. They enjoyed nearly twelve years of a happy life together. Daryl was raised with his eight brothers and two sisters in Parowan. He attended Parowan Elementary and Parowan high school where he was active in sports and other activities. He left Parowan in his Senior year and went to live with his sister in California. Before he could graduate, he joined the United States Air force during World War II. Daryl served our country and received specialized training including that of a Pilot, a Navigator, and a Bombardier. He retired after twenty-six years of service and retired with the rank of Lieutenant Colonel. Daryl was a life long member of the Church of Jesus Christ of Latter Day Saints. He is survived by: his wife Katherine; and his four step children, Karen (John) Miller, Marsha Petty, Mary Jane (Douglas) Anthony, Merton (Kate) Mitchell and many nieces and nephews. He was preceded in death by: his wife, Wilma, his parents and all of his brothers and sisters. Funeral services will be held on Saturday, December, 21, 2019 at 12:00 noon. A Viewing will be held prior to the service from 11:00 to 11:45 am. Both will take place at the Parowan 3rd and 4th Ward LDS Chapel, 90 South Main Street, Parowan, UT. Interment with Military Honors will follow at the Parowan City Cemetery. A special thanks to Lynette and Hali Adams who took such loving care of Daryl and mother during this past year and to Horizon Home Health for their kind and specialized care over the last few years. Family and friends are invited to share condolences online at www.SerenityStG.com Arrangements and memorial tree planting by Serenity Funeral Home of Southern Utah, 986-9100.

Daryl Rasmussen Halterman, age 94, passed away on Saturday, December 14, 2019, in Cedar City, UT, after a long and fulfilling life, with his loving wife and family by his side. Daryl was born March 18, 1925, to Robert Lee and Bertha Butella... View Obituary & Service Information

The family of Daryl Rasmussen Halterman created this Life Tributes page to make it easy to share your memories.

Send flowers to the Halterman family.