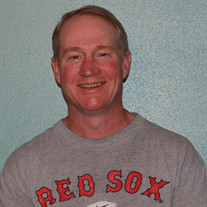 David Warren Barden, 52, passed away on June 6, 2018 at his home after a 4-year battle with brain cancer. He was born December 28, 1965, in Hartford, Connecticut, to Warren Everett and Dorothy Ann LeClaire Barden. He was married on August 1, 1987 to Jodie Maude Recor in Mansfield, Connecticut. Dave grew up in Connecticut and attended Becket Academy in East Haddam, Connecticut. He enlisted in the Navy following graduation and served four years aboard the nuclear aircraft carrier USS Nimitz, stationed in Norfolk, VA and later Bremerton, WA. Dave had seen much of the world while in the Navy, and wanted to see more of his country. On a trip out west, he and Jodie fell in love with Southern Utah and moved to LaVerkin in October 1994. Dave was a real handy man, and built his house in Hurricane in 2000. He worked at Wal-Mart Distribution in Hurricane and made many friends there. Dave loved to go hiking in the washes of Zion and travel to various national parks. He and Jodie also loved Carrrbna, California which was like a home away from home. Dave’s favorite hobby was photography. Dave was a lifelong Red Sox fan. When the Red Sox won the World Series in 2004, he saw a dream fulfilled. In March 2014, Dave was diagnosed with glioblastoma multiforme (GBM), an aggressive form of brain cancer. Cancer didn’t take his optimistic spirit and he continued to travel and enjoy life as much as possible. His mantra during treatment was “when the going gets tough, the tough go on vacation.” He was an inspiration to all who knew him. Dave loved to help people, and enjoyed talking to them. He will be remembered for his quick wit and sense of humor. Dave was a member of the American Legion Post 52 in Coventry-Mansfield, Connecticut. Dave is survived by his wife of 30 years Jodie and beloved Norwich terrier Jack; his mother Dorothy Eaton and stepfather Joseph Eaton; his sister Laurie (Dennis) Freeman; nephews Benjamin DesRosier and Justin Hynes; niece Kendra Hynes; mother-in-law Joyce Recor Passmore; and brother-in-law Edward Jeffrey (Roberta) Recor. He is preceded in death by his father Warren Barden; sister Linda Barden; niece Kathleen Sanelli; grandparents Harry and Viola LeClaire; and father-in-law Edward J. R. Recor. The family would like to thank Dixie Regional Medical Center Oncology Services, Neurosurgical Services, Inpatient and Outpatient Neuro Rehab, as well as Dixie Hospice. Dave received the most wonderful care both during treatment and when treatment was no longer an option. He gave cancer all he had and never gave up. Special thanks to Craig Donaldson, MD; Ben Fox, MD; Jotham Manwaring, MD, and Brian Tudor, MD as well as hospice nurse Kathy for their extraordinary care and compassion. A viewing will be held Saturday June 16, 2018, from 9:30 - 11:00 a.m., with funeral services at 11:00 a.m., at the Sky Mountain Chapel 452 N 2600 W in Hurricane, UT. Internment with full military honors will take place Wednesday June 20, 2018 at 10:00 a.m. at the Hurricane Cemetery.

David Warren Barden, 52, passed away on June 6, 2018 at his home after a 4-year battle with brain cancer. He was born December 28, 1965, in Hartford, Connecticut, to Warren Everett and Dorothy Ann LeClaire Barden. He was married on August 1,... View Obituary & Service Information

The family of David Warren Barden created this Life Tributes page to make it easy to share your memories.

Send flowers to the Barden family.