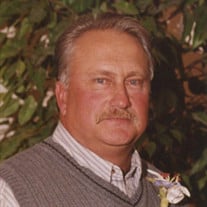 David Chamberlain, 72, of Hurricane, Utah passed away on May 19, 2022. We are deeply saddened by his passing and have hearts of gratitude that we have a treasure chest full of fond memories that will remain until we meet him again. David was born on May 19, 1950, in the small town of Milford, Utah where he spent his early childhood until the family made a brief move to Springville, Utah. The family moved to Hurricane when David was 7 years old and where he resided the rest of his life. He married the love of his life, Kimberly Rae Feuerhelm in July 1975 and went on to have two children. He supported his family by working 34 years for the Utah Department of Transportation. He was a dedicated husband, father and grandfather supporting his family in all their interests and endeavors. Through the ‘80’s and ‘90’s he would often load up the “Old Brown Ford” with the camper and horse trailer to haul the family around so mom could compete in long distance horse racing. Fall time would start the wrestling season, where he would drive his sons and anyone else who needed a ride to all the small towns in Southern and Central Utah so they could compete in the Saturday tournaments. He lived a vibrant life until he began to experience health issues that caused him to have difficulty breathing. Although limited and sometime with difficulty, he made every effort he could to enjoy time with family and friends. David was most happy when he was spending time at the family ranch in Hogs Heaven. The ranch was his sanctuary where he often taught his two sons many life lessons. Many of these lessons were the same ones that his father taught him and his brother in their youth. He particularly enjoyed time at the ranch when family and friends would gather for the fall deer hunts. This was a long-lasting tradition that even during health difficulties, he rarely missed. While at the ranch, he rarely drove by anyone without stopping and making sure all was well. Many times, he would invite them to the cabin to enjoy a meal with his fantastic sourdough biscuits. He and his cousin Paul felt it was their personal responsibility to teach anyone that would sit at the cabin table how to make the perfect sourdough biscuit. David is preceded in death by his parents, Charles Howard (Todd) and Lena, and his older brother Gary. Left to cherish his life are his loving wife Kimberly, his son and daughter-in-law Buck and Sheralun, his son Brandon, and 8 grandchildren Porter, Emilia, Elijah, Kael, Maleena, Adelin, Abram and Triston, and his two sisters Val Rae and Marlyn. There will be a visitation at 10am on Saturday, June 4, 2022, followed by a funeral service at 11am at the Church of Jesus Christ of Latter Day Saints chapel located at 320 North 3400 West (near Walmart), Hurricane, Utah 84737. The service will be followed by a luncheon provided by Hurricane 25th Ward Relief Society for immediate family and friends that are traveling from 12am to 1pm at the cultural hall of the chapel. Dedication of the Grave will be held at 2:30pm at the Summit City Cemetery located at 300 North 150 West, Summit, Utah 84772.

David Chamberlain, 72, of Hurricane, Utah passed away on May 19, 2022. We are deeply saddened by his passing and have hearts of gratitude that we have a treasure chest full of fond memories that will remain until we meet him again. David was... View Obituary & Service Information

The family of David Chamberlain created this Life Tributes page to make it easy to share your memories.

David Chamberlain, 72, of Hurricane, Utah passed away on May...