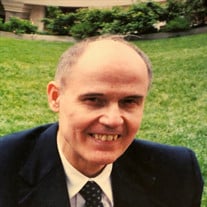 Dave Ross Perkins returned home to his precious Lord and Savior Jesus Christ on December 10, 2020. Dave was the second of three sons born to Daniel Ward and Winnibelle Binion Perkins on Nov 2, 1941 in Riverside, California. Dave’s life had its challenges. One was deafness at age 11 in 1952 caused by a progressive hearing loss from German measles and a high fever at age 5. Dave’s life was turned upside down. Remembering his childhood church experiences of God, prayers and scriptures Dave was given faith comfort and strength to go on with his life. Dave had faith God did hear his prayers and help him carry the burden of deafness. Dave attended high school at Calif School for the Deaf Riverside learning a new language and culture. He excelled in academics graduating with honors in 1961. Dave also attended Gallaudet University in the world for the Deaf in Wash. D.C. from 1961-1966. A second challenge for Dave came shortly after graduating from Gallaudet. Dave had a stressful time there and shortly after graduation he suffered a mild nervous breakdown becoming visually impaired. It took Dave 8 years of working with his father at odd jobs to get his life back together again. It would be 8 years before Dave got his life together to try again with encouragement from his mother and VR counselor not to give up his dream to become a teacher for the deaf. Dave attended Calif St Univ Northridge from 1974-1981. On March 30, 1974 the most important in Dave’s life happened as he was baptized a member of the Church of Jesus Christ of Latter-day Saints. Accepting the Lord’s challenge to pay his tithing Dave was blessed as he earned a BA in liberal studies, a MA in Special Ed and a Calif Teaching Cred. He taught priesthood and Sunday School classes to the deaf for many years. Professionally he taught adults with learning disabilities in Fountain Valley, Calif. The second most important event in Dave’s life came as he married Elizabeth McClellan Perkins on Oct 16, 1982 in the Jordan River Temple in Salt Lake City, Utah for Time and eternity. Reflecting on his life Dave said it was like a fairy story and you can see what the Lord can do with an average person. Preceded by his father in 1990, his mother in 2000 and his older brother Dennis in 2008. Survived by his wife Elizabeth of St George, Utah and his youngest brother Tim of Banning, Calif. Viewing and memorial services to be held at the St. George 7th ASL (American Sign Language) Branch in St George, Utah on December 12, 2020. Viewing and funeral services will be at the Southwind church building at 1155 N 1400 W, St. George Utah. The Viewing will be from 10:00 – 11:00am, the funeral will be from 11:00am – 12:00pm. Online streaming through Zoom will be available for the funeral. A graveside service will be held on Wednesday December 16, 2020 at 1:00pm, located at Wasatch Lawn Cemetery, 3401 Highland Dr. Salt Lake City, Utah 84106

The family of David Ross Perkins created this Life Tributes page to make it easy to share your memories.

Send flowers to the Perkins family.