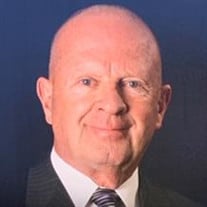 David Russell Rankin, age 79, passed away on Sunday, August 11, 2019 at his home in LaVerkin, Utah. He was born November 23, 1939 in Eugene, Oregon to Robert Franklin Rankin and Vila Alberta Goddard. In 1967 he met and married Jimmie Donoho and together they had five daughters. After several years of being single he met Beverly Glenn in 1998. In 2001 they were married in the Portland LDS Temple. He graduated from Grants Pass High School in Grants Pass, Oregon. After graduation he joined the United States Navy. Upon returning home from the military, David joined the Church of Jesus Christ of Latter-day Saints and served a mission in the Eastern States Mission. He later enrolled and graduated from Ricks College in Rexburg Idaho. He then transferred to Brigham Young University in Provo, Utah. David was a proficient carpenter and worked for the Washington, Oregon and Idaho Carpenters Union for over 30 years. He was an avid writer and published several papers and books. He loved hot rods and muscle cars and if you couldn’t find him on a Saturday, he was probably at a vintage car show or out in his own garage working on his ‘66 Chevy. He loved politics and could talk for hours about what was going on in the Nation. He was a member of The Church of Jesus Christ of Latter-day Saints and served in the Bishopric, Elders Quorum President, High Priest Group and loved teaching Priesthood and Sunday school. He and his wife Bev served together as proselyting missionaries in the Utah Provo Mission for The Church of Jesus Christ of Latter-day Saints. David is survived by his wife Beverly Draper Rankin; a brother Johnny (Connie) Dunton, his daughters; Barbara (Tony) Hart, Sheri (Matt) McDaniel, Julie Rankin, Sarah Rankin and Amy (Kasey) Callahan. David was also a wonderful father and grandfather to Beverly’s children; Jennifer (Pat) Bode, Amelia (Jeff) Bronk, Michelle (Fred) Smith, and Wade Michael (Jlyn) Glenn. David and Beverly have been blessed with 25 grandchildren and 6 great grand children. He was preceded in death by his father Robert Franklin Rankin and his mother Vila Goddard Rankin; three brothers; Gerald Rankin, Donald Rankin and Leo Hammer. The family would like to give special thanks to Dr. Mel Carter. Also, Ashley, Pauline, Kathy and Kason from Pathway Hospice and Palliative Care for their loving care and concern. Funeral Services will be held on Saturday August 17, 2019 at 2:00 pm. at the LaVerkin LDS Stake Center, 481 N. Main LaVerkin, Utah. A viewing will be held that same day at 12:30 pm. Interment will be held at the LaVerkin City Cemetery. Military honors provided by American Legion Post 100.

David Russell Rankin, age 79, passed away on Sunday, August 11, 2019 at his home in LaVerkin, Utah. He was born November 23, 1939 in Eugene, Oregon to Robert Franklin Rankin and Vila Alberta Goddard. In 1967 he met and married Jimmie Donoho... View Obituary & Service Information

The family of David Russell Rankin created this Life Tributes page to make it easy to share your memories.

Send flowers to the Rankin family.