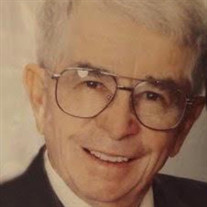 Delmer Joseph Harris, 88, passed away on April 30, 2020, peacefully at his home in St. George, Utah. He was born in the Uintah Basin in Eastern Utah on Oct. 28, 1931, to Lester Harris and Sadonna Clark Harris. One of seven children, Del and his family moved to Sandy when he was very young. It was there that he met and married his first wife, Marjorie Grimaud. They had nine children, eight daughters and one son, and ended up building two houses during his lifetime for his growing family. After his first marriage dissolved, he married Gladys Kaiser, with whom he had two more daughters, all the while running his farm and working as a brakeman and train engineer at Kennecott Copper Mine. After 35 years at the mine, he retired to St. George, where he used his time to paint, garden, and serve as ward clerk and Sunday School teacher for the Church of Jesus Christ of Latter-day Saints. He also served two consecutive missions at the Bishop’s Storehouse. Perhaps the most significant of his gifts was his gift for music. He was an accomplished self-taught musician, composer, and performer, and he wrote and illustrated a book on how to play finger-style guitar by ear. He was proficient on the button accordion and harmonica as well. Del is survived by his wife of 15 years, Venice Ward Harris, brothers Calvin (Elaine) Harris and James (Judy) Harris, and his children: JoAnn Rowley (Don), Eugena Ledbetter (Richard), DeAnna Stewart (Randy), Lila Thacker (Scott), Cindy Gallagher (Sherm), Andrew Harris (Lynette), Karen Beck (Blake), Brenda Pitcher (Todd), and Apryl Gomez (Mikey). His posterity includes 35 grandchildren, and 52 great-grandchildren. He was preceded in death by brothers Ellis Harris and Eldon Harris, sisters Elna “JoAnn” Harris and Darlene Mickelsen, daughters Bonnie Kay and Dixie Lynn, son in-law Stacy J. Smith and grandson, Eric Thompson. The family would like to thank his wife Venice, granddaughter Autumn Pitcher, the SunTree Hospice nurses, and Serenity Funeral Home of So.Ut., in addition to many other family members who were willing to help as they could. Due to current circumstances, a graveside service will be held at the Lehi City Cemetery, 1525 North 600 East, Lehi, Utah, on Friday, June 19, 2020 at 11:00 a.m.

Delmer Joseph Harris, 88, passed away on April 30, 2020, peacefully at his home in St. George, Utah. He was born in the Uintah Basin in Eastern Utah on Oct. 28, 1931, to Lester Harris and Sadonna Clark Harris. One of seven children, Del and... View Obituary & Service Information

The family of Delmer J. Harris created this Life Tributes page to make it easy to share your memories.

Send flowers to the Harris family.