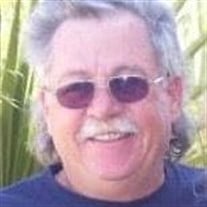 Dennis Craig Howey Sr. born Sept 8, 1948, passed at home June 19, 2022 from heart related complications. He is preceded in death by his parents Mildred Scott Howey and Roger Howey II, as well as his beloved second wife Sue Hill Howey, who he affectionately called “Suzie.” A patriotic man, he served his country proudly with two tours in Viet Nam as a Navy SeeBee. After returning home to Bountiful, Utah, he married Shauna Jacobson-Howey-Fox. They were married for 21 years and had four wonderful boys together. Craig was a talented mechanic. He was extremely close to his father and worked side by side with him at the family business, Rodger’s Speed Shop, for many years. He had a passion for cars and motorcycles. He also worked as a diesel mechanic at Garrett’s/ANR Freight. He later married Sue. They were married for 12 years before she passed from cancer in 2009. Part of him died when she did. Before retirement, he served the people of St. George in the water works department. He enjoyed visiting with his co-workers and friends. He loved his John Wayne movies paired with his favorite, a Diet Coke. His last words were, “Coke tastes like shit.” He was privileged to marry Cyndi in the final chapters of his life and loved both her and her mother. They were married for nine years. All who loved Craig, thank Cyndi for her love, service, and devotion to him during his final days. Survived by: His wife Cyndi and her mother Barbara. Shauna and their children: Denny, Chris (Michele) Mike, Jeremy (Erin). Grandchildren: Briton (Megan), Alex, Kaitlyn, Ava, Clover, Owen, and Sawyer. As well as his step daughter through Sue, Aimee. His siblings: Barbara, Roger III, Scott (Diane), and Gayle. Many nieces and nephews, as well as many close friends. He will be remembered by his family and friends as tough and strong, with a quick wit. Craig loved to tease and will be missed. Graveside services will be held Saturday June 25, 2022 at the Lakeview/Bountiful Memorial Park at 11:00 AM.

The family of Dennis Craig Howey Sr. created this Life Tributes page to make it easy to share your memories.

Send flowers to the Howey family.