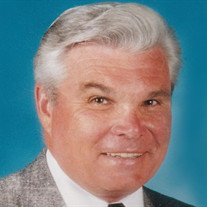 Dennis Thorson passed away peacefully on July 21, 2019 in St George, UT, with his family at his side.  He was born in Duluth, MN, on Feb 1, 1935 and moved to Fontana, CA in 1944 on his 9th birthday.  He attended local schools and went to Chaffey High School in Ontario.  He graduated in 1953 and joined the Army in 1954. He went to Korea arriving just after the war was over and helped moved men off the front lines.  After he returned he went to Chaffey College while working at Kaiser Steel. In June of 1957, he married Doris Joye and they celebrated 62 years together in June.  They moved to Desert Hot Springs in 1960 when Dennis went to work through the Electrical Union in the desert.  He got his contractor’s license in 1965 and began his own business, Thorson Electric. He was active in DHS, joining the Volunteer Fire Dept, becoming a member of the local Planning Commission, elected to the Water Board, and was President of the Rotary Club that was responsible for the building of the Wardman Park, the local library, building of the Youth Club, and various other projects.  He was also instrumental in helping to start a local Little League organization.  He was active in the National Electrical Contractors Association in Riverside, being on the board of directors and serving a term as president.  He loved his work and was very proud of the many projects he worked on in the Coachella Valley.  He also worked for a time on the Alaska Pipeline. He loved fishing and hunting and would plan a hunt every year with his buddies.  In the 80’s, he and Doris purchased a 2nd home in Pinedale, WY, in preparation for retirement.  They spent many years there as snow birds, where the children and grandchildren could come to vacation or spend summers. They loved entertaining friends who came to visit, and Dennis would show them his favorite fishing spots and the wonders of the beautiful mountains surrounding them. He also took up woodworking and bought a sawmill so he could make his own lumber from the trees in the forest. This brought friends and neighbors around to help.  He loved reading books on historical fiction and studied facts about the Pinedale area, families, and ranches.   He and Doris loved to travel making numerous trips to Europe over the years where Doris had family.  Canada, Mexico, Central America, and the U.S. were also on their list of travels. He loved to look up old friends from the Army, school, and various places he worked.  If he could find them it was never out of his way to detour a bit to visit.  He was active in the local American Legion and also the VFW, which was the central part of most social activities in their lives. He always made sure his family and friends knew how lucky he was to have married Doris as she was always supportive of his adventures.  He was a wonderful example of unconditional love for his family and friends. The grandchildren were his pride and joy and as well as great-grandchildren in the last 10 years.  Although his health had been failing the past few years, he never complained and death was unexpected.  Dennis leaves his wife Doris, and 4 children: daughters, Victoria Show, Denise (Steve) Austin, Michelle Cockrell, and his son, Vincent (Laura); his grandchildren, Breanna Nelson, Brittany (Ryan) Hunter, Jared and Jordan Cockrell, Bryson Show and Randy Austin; and 6 beautiful great-grandchildren. He is preceded in death by: his parents, Eldon and Barbara Thorson; his sister Pat Stevens, and a grandson, Joshua Austin. A Celebration of his Life Service will be held at the American Legion Post 519 at 400 N Belardo Rd in Palm Springs, California, on Sun Aug 4th at 3:00 p.m. with a buffet and reception to follow.

Dennis Thorson passed away peacefully on July 21, 2019 in St George, UT, with his family at his side.  He was born in Duluth, MN, on Feb 1, 1935 and moved to Fontana, CA in 1944 on his 9th birthday.  He attended local schools and went to Chaffey... View Obituary & Service Information

The family of Dennis Thorson created this Life Tributes page to make it easy to share your memories.

Send flowers to the Thorson family.