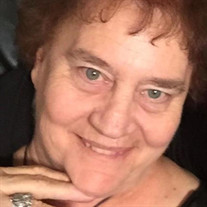 Diane Lamoreaux, age 69, died peacefully in her home in St. George on August 21, with her son and daughter-in-law at her side. She battled cancer with surgery, chemotherapy, and radiation and enjoyed a little time when she thought she had won. But cancer had just been hiding and came back hitting hard. She tried again to fight, but it was not a battle she could win. She was born December 2, 1950, and grew up playing outdoors in Paragonah with her brothers, their friends, and cousins. She graduated from Parowan High School. Diane was fiercely independent and self-reliant. Her son, Cade, was her pride and joy and his friends were always accepted, welcomed in her home, and treated like family. Diane was strong, with firm opinions, was extremely loyal, quick to laugh, and fond of Diet Pepsi with ice. She was a tireless worker and the go-to person for bottling and preserving the harvest from her father’s enormous garden and fruit trees in Paragonah. She also hauled countless trunk-loads of zucchini, squash, cucumbers, apples and peaches to give to friends and co-workers in St. George. Diane worked for the Five County Association of Governments for 33 years and made life-long friends. She continued to volunteer to take the minutes of meetings after her retirement so she could maintain contacts and keep in touch. In 2013 the Utah Housing Coalition named her the Utah Housing Matters Person of the Year. Diane liked to have busy hands and always had crocheting or embroidery underway, often both at the same time. She also turned pasta into small, delicate angel ornaments for Christmas. Her brothers, sisters, nieces, nephews, and friends were recipients of her lovely handiwork. Diane is survived by her son, Cade and his wife, Brooke, and two bonus grandsons, Kaden and Josh; her father, Walter K, brothers Randy (JoAnne) and Gary (Lisa); and sister Janet (Ron) Carter. She was especially close to, and supported by, special nieces J.C. Durfee, Monica Condie, and Shanell Jensen. She was preceded in death by her mother, EveLou, and sister, Janice Sturdevant. A graveside service will be held on Saturday, August 29, at 10:30 a.m. in the Paragonah Cemetery where she will be interred. Family and friends are invited to share condolences online at: www.SerenityStG.com. Arrangements are under the direction of Serenity Funeral Home, St. George of Southern Utah, 435-986-9100.

Diane Lamoreaux, age 69, died peacefully in her home in St. George on August 21, with her son and daughter-in-law at her side. She battled cancer with surgery, chemotherapy, and radiation and enjoyed a little time when she thought she had won.... View Obituary & Service Information

The family of Diane Lamoreaux created this Life Tributes page to make it easy to share your memories.

Send flowers to the Lamoreaux family.