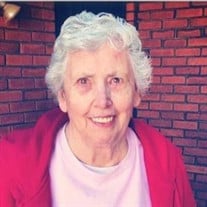 St George, UT – Dolores Anne Riggs. 84. Passed away peacefully in her home surrounded by her family, on Friday August 14, 2020, she was oldest daughter of Elvin Davis and Dolores Bugher on February 21st, 1936 in Evansville, In. She grew in Chandler, Indiana when life as simple. She was a Tom-boy and she “could whip any boy her age in any game they wanted to play.” She grew up listening to stories about old west and dreamt of moving there someday. Shortly after she married Raymond Franklin Curtis (aka: Ray, Frank, Curley or Tyke) in July 1953 her dream of moving west came to fruition and the Davis/Curtis Family moved to Tucson, AZ. As the years moved on, she got a job at the Kaibab Lodge near the Grand Canyon where she met married Ted Riggs, and moved to Mesquite, Nv and became the wife of a Trapper. She learned to make bait for Ted’s traps and helped skin the animals Ted trapped. She finally made it to the real west that her grandmother, Nanny, told her about. While in Mesquite she worked as a bookkeeper for a little truck stop called the Western Village (latter the Peppermill, and later the Oasis). She worked at the Oasis until she retired in 1998 and moved to St George, UT. Dolores had 10 Children, 24 grandchildren 59 great-grandchildren and 10 Great-Great-Grandchildren with 3 on the way, and she loved them each and every one. She is survived by her two sisters Glenda McKinney and Mary Cox, her children: Gerald “Jerry” (Micky) Curtis, Santa Clara, UT, Lora Reber, St George, UT, James (Linda) Curtis, Highland Ranch, CO, Susie Riggs (Daughter-in-law) San Antonio, TX, Edwin Riggs, St George, UT, Carol (Kenny) Davis, St George, UT, Joyce (Garry) Knapton, Salt Lake City, UT, and Tim (Robin) Riggs, Cedar City, UT She is proceeded in death by: her parents; husbands Raymond and Ted; her two brothers, Jerry Brown and Eddy Davis; Brother-in-laws, Howard McKinney, and Cliff Cox; Daughter-in-law Merlyn Riggs; and children David Riggs, James Riggs and Silvia Gates. We would like to thank Kathy, Lisa, and Laura as well as all of the staff that help from Canyon Home Health and Hospice, and Dr. Codiga’s office for the care they gave her in her final days. We would also like to thank Serenity Funeral Home of Southern Utah for their respect and professionalism. A graveside service will be held at the Kanab, UT Cemetery at 10:30 am. On Saturday, August 22nd. In Liu of flowers, please make a donation to the Children’s Miracle Network or your favorite charity. Memorial tree planting by Serenity Funeral Home of Southern Utah.

St George, UT &#8211; Dolores Anne Riggs. 84. Passed away peacefully in her home surrounded by her family, on Friday August 14, 2020, she was oldest daughter of Elvin Davis and Dolores Bugher on February 21st, 1936 in Evansville, In. She grew... View Obituary & Service Information

The family of Dolores Anne Riggs created this Life Tributes page to make it easy to share your memories.

Send flowers to the Riggs family.