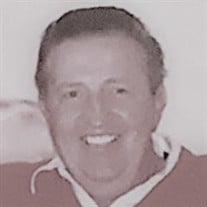 Don Dee Wilkinson, resident of St. George, UT, passed away on March 16, 2019, at age 89 with his beloved wife Patricia Ann by his side. Don was born July 10, 1929, in Heyburn, ID to Clarence Dee and Lela Elvera Peterson Wilkinson. Don went to Caldwell High where he was a football and basketball star. He married his high school sweetheart, Patricia Ann Marvinec, on February 11, 1951, and were later sealed in the St. George Utah temple in September 2005. Together they welcomed four children into their family, Don Jr., Patrick, Cynthia and Stephanie. Being an uncle to Jim’s six children made each summer trip a family fest. This is when Don was the happiest, surrounded by his family. Don and Patricia moved to Southern California while Don served in the Marines at El Toro Marine Base, in Southern California. After his service, Don received a medal for good conduct. Don was an accomplished carpenter and made a career out of building. He worked for Deane Brothers Homes, overseeing the very first track of homes on Mission Viejo. Later, Don became the vice president of Rossmoor Leisure World for construction in seven different states. He was very proud of his work and was a very hard worker, but his first project was always his family. Today, Don has eight grandchildren, Amy, Emily, Christopher, Matthew, Hilary, Jacob, Brenda, and Benjamin; and ten great-grandchildren. As the family grew, camping was the way to stay together. Don enjoyed life when he was fly fishing in the back streams of Montana with his father. Don loved his life, which was full and never boring, and loved his family deeply. Families are forever. Graveside services will be held on Sunday, March 24, at 12:30 p.m. at New Harmony Cemetery, in New Harmony Township, UT.

The family of Don Dee Wilkinson created this Life Tributes page to make it easy to share your memories.

Send flowers to the Wilkinson family.