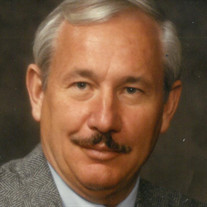 Donald Vinnell Leavitt, 89, passed away December 20, 2019, in St. George, UT. He was born April 3, 1930, in Auburn, Wyoming, to Ray Bryan and Mona Ilene Putnam Leavitt. He married Maxine Petersen on April 4, 1950, in the Idaho Falls Temple. Together they raised three children, they later divorced in 1982. He married Dixie Wynn April 17, 1987 in the South Jordan Temple. Donald was raised on a dairy farm in Auburn, WY. He attended High School in Afton, when he came of age he joined the US Navy. He worked as a supervisor in the Civil Service at Hill Airforce Base. He was an active member of the Church of Jesus Chris of Latter-Day Saints together with his wife Dixie they served a mission in Spain. He loved the outdoors, and entertaining visitors. He loved his family very much. Don was survived by: his first wife Maxine Petersen, his children, Ken Leavitt, Russell Vinnell (Cindy) Leavitt, Liisa (James) Hunt, Kimberly Bradshaw; Siblings Bernita Snook, Norene DeTorres; grandchildren, Brandon, Chad, Destry, Saarandon, Tanner, Jeffrey, and Derek; and 10 great-grandchildren. He was preceded in death by: his parents; wife Dixie; step-sons, Chuck Parker, and Scott Bradshaw; siblings, Garth, Bryan, Floyd, Louise, Helen, and Jenean. Funeral services will be held Monday, December 30, 2019, at 11:00 am at the Green Valley 1st Ward LDS Chapel, 511 South Valley View Dr., St. George, Utah. A visitation will be held from 9:30 to 10:30 prior to the service. Interment and military honors will follow at Tonaquint Cemetery. Family and friends are invited to share tributes online at www.SernityStG.com. Arrangements and memorial tree planting by Serenity Funeral Home of Southern Utah, 986-9100.

The family of Donald Vinnell Leavitt created this Life Tributes page to make it easy to share your memories.

Send flowers to the Leavitt family.