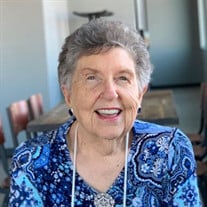 Donna Jean Anderson Bledsoe, our beloved sister, mother, grand and great grandmother, passed away peacefully on Saturday June 5, 2021 at her home in Washington, UT, surrounded by several of her children and family members. Donna was born on September 30, 1935 to Grant Larson Anderson and Marjorie Bernice Simons Anderson in Salt Lake City, UT. As a young child, she moved to San Pedro, CA. As a young teenager, she moved to nearby Long Beach, CA. She graduated from Long Beach Polytechnic High School in 1953, where she excelled in secretarial skills. She could type 140 words per minute. A life-long member of the Church of Jesus Christ of Latter-day Saints, she met Charles Robert Bledsoe at a church youth activity in 1952. It was not love at first sight for her, but in time he won her heart, and they were sealed for time and eternity at the St. George Temple on September 7, 1954. Nine months later, their first child arrived. And after only thirteen years of marriage, they were the parents of ten children, nine boys and one girl. Donna was a devoted wife and mother. For the first thirty years of her married life, her family was virtually her only focus. She simply had no time for anything else. But she gave her heart and soul to her marriage and her children. She taught us the Gospel of Jesus Christ, both from the scriptures, and more importantly, through her example of Christlike living and Christlike service. She loved our Savior Jesus Christ, and strived to live His Gospel to its fullest extent. There was never a question of that in the minds of her family members or anyone else who knew her. She also served willingly and faithfully in many church callings throughout her entire life. Donna and Bob made their first home in Compton, CA until in 1959, when they moved to Anaheim. From there, they lived in Huntington Beach, Agoura, Fountain Valley, Wrightwood, south Orange County, and north San Diego County, CA; Omaha, NE; and finally, Washington, UT; she lived for the last 16 years of her life. Donna loved everyone she knew, and was beloved by everyone who knew her. She was always the first person to volunteer assistance, and her door was always open to anyone in need. Notwithstanding her own large family, she took in countless people who were in need of assistance, some of whom lived in her home for months at a time. For many years she lived at the first intersection nearest to the Ventura Freeway. Often, people who broke down would choose her door to knock on because they just had a feeling that the people in her house would be able to help them. With ten hungry mouths to feed, it is no wonder that Donna became an amazing cook. Her tamale pie was legendary, and she usually sent visitors home with a large tray of her scrumptious marshmallow rice crispy treats. And she never forgot a child’s, grandchild’s, or great-grandchild’s birthday. She always sent everyone a birthday card and a $2 bill. Donna loved music. She enjoyed playing the piano, but never seemed to have enough time for it. She loved to watch Broadway musicals, and performed minor roles in many stake plays just to be part of them. Her favorite color was yellow, and she especially loved yellow roses. Donna exemplified selfless service throughout her entire life. She was always cheerful, compassionate, and willing to lend a listening ear. With all the responsibility Donna willingly accepted beginning at such a tender age, few people would have wanted to trade places with her. But no one was ever heard to criticize her. Most people were simply in awe of her. Donna was preceded in death by her parents, her sister Marilyn, her husband, and their son Robert Gene. She is survived by her Sister Daryl Johnson (Don); her brothers Grant (Diane), Kenneth (Donna), Carl (Brenda), and Keith (Wendy); her daughter Linda; her sons Robert Dean (Denelle), John (Debra), David, Dennis (Kendall), Steven (Miriam), Carey (Lisa), Jim (Angie), and Scott (Marja); and by 40 grandchildren and at least 43 great-grandchildren. A family reception will be held at 9:00 a.m. on Saturday June 19, 2021 at the LDS Meetinghouse at 3167 E. 1140 South, Washington, UT. Funeral services will follow at 10:00 a.m. Interment will take place immediately thereafter at the Washington City Cemetery.

Donna Jean Anderson Bledsoe, our beloved sister, mother, grand and great grandmother, passed away peacefully on Saturday June 5, 2021 at her home in Washington, UT, surrounded by several of her children and family members. Donna was born on... View Obituary & Service Information

The family of Donna Jean Anderson Bledsoe created this Life Tributes page to make it easy to share your memories.

Send flowers to the Bledsoe family.