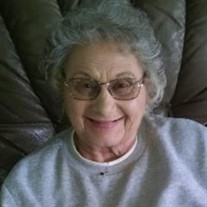 Donna Fae Fairchild, 87, passed away on October 19, 2021, in Murray, Utah with her son and daughter by her side. She was born on November 18, 1933 in Coleridge, Nebraska to John Ludwig Stapleman and Daisy Bell (Jordan) Stapleman. Donna Fae was the last to be born into a large family of 10 brothers and sisters. As a small girl, Donna and her family moved to Rupert, Idaho and that is where she spent much of her childhood. Her father died when she was a young girl and Daisy Bell had to be the sole provider for their family. Donna sometimes worked with her mother doing dishes in a small café and then would often times treat herself to a movie at the local theatre. As a young woman, Donna went to stay in Nebraska with her sister. While in Nebraska, Donna met and later married Russell Devers. Together they had 5 children, Kathy, Donel (Floyd), Stephen, Pam, and Mike (Tammy). Donna and Russ eventually divorced and she moved back to Idaho and married George Raymond Fairchild. They welcomed one last child together, Donald, to complete their family. One of the things she loved most was to travel. She could sit and talk for hours about the places she had been. One of her favorite past times was playing card games or dice. Entire afternoons were spent at the table with her, playing card games, and reminiscing. Donna loved to visit with family and friends. Her house was always open and never empty. Just the way she wanted it. She was very social and greatly enjoyed other people’s company. She had many stories and would share with anyone who listened. She was so friendly and could start a conversation with a complete stranger. Donna loved to babysit and was considered a “second mother” to many children and had many “second families”. Donna’s house was the gathering place during the holiday seasons. Family and friends will remember ginger snap cookies, cheeseballs, and her famous green beans! She took great pride in her Christmas tree every year. Every tinsel, light, and ornament hung just right, nothing out of place. Donna was a very loving individual and was always taking care of others. Her life was spent caring for those around her. Donna is survived by her six children, twenty grandchildren, too many to count great grandchildren, and great great grandchildren as well! Donna is preceded in death by her husband George, parents, all 9 siblings, and 5 grandchildren. Funeral services will be held 11:00 a.m. Friday October 29, 2021 with a viewing that morning from 9:30 a.m. until service time at Morrison Payne Funeral Home 321 East Main Street Burley, Idaho. Burial will follow at the Pleasant View Cemetery.

Donna Fae Fairchild, 87, passed away on October 19, 2021, in Murray, Utah with her son and daughter by her side. She was born on November 18, 1933 in Coleridge, Nebraska to John Ludwig Stapleman and Daisy Bell (Jordan) Stapleman. Donna Fae was... View Obituary & Service Information

The family of Donna Fae Fairchild created this Life Tributes page to make it easy to share your memories.

Send flowers to the Fairchild family.