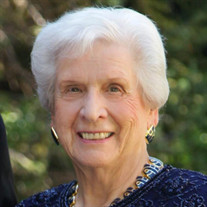 Donna Parker Kilfoyle was born December 26, 1923 in Idaho Falls, ID to Charles Jacob and Elizabeth (Anderson) Parker. On April 3, 2021 she joined her husband, Stearns, and daughter, Karel, in Heaven along with her parents and all seven of her siblings. At a young age the family moved to Ogden, UT and when she was 10 years old the family moved to Bountiful, UT. She attended Bountiful Jr. High and graduated from Davis High School in 1942. She married her high school sweetheart, Stearns L. Kilfoyle, on June 25, 1943 in the Salt Lake City temple. In 2013, the family held an Open House in celebration of their 70th wedding anniversary. Donna worked at Hill Air Force Base ZCMI personnel office while Stearns was serving during the war. After the war ended, they lived in Verdland Park where son, Gregory Stearns was born and a year and a half later daughter, Karel Ann. In 1950 the family moved to Clarkston, WA where son, Jerry Parker, later was born. While in Clarkston, Donna worked with her husband in the office of Smith’s Frozen Foods for several years during the summer pea harvest. Throughout her life Donna was an active member of the LDS church where she was involved as Primary President, Young Woman President, Relief Society President and many other callings. In 1976, they moved back to Layton, UT. Donna was the Director of the Beehive House for eight years. After Stearns retired, they bought a house in St. George, UT and traveled there every winter for 30 years. In July 2020 she moved to Santa Clara, UT and lived with her son and daughter-in-law, Jerry and Lyndee, who lovingly cared for her until her passing. She is survived by her sons Greg (April) of Scottsdale, AZ and Jerry (Lyndee) of Santa Clara, UT; and son-in-law Richard Linford of Centerville, UT. She is also survived by 8 grandchildren and 12 great-grandchildren. Funeral services will be held on Friday, April 9, 2021 at 11:00 a.m. at the Summerwood Ward Chapel located at 1410 E. Gentile Street Layton, Utah. A visitation will be held on Thursday, April 8, 2021 from 6:30- 8:00 p.m. at the same location and Friday the 9th prior to the services from 10-10:45 a.m. A graveside ceremony will be follow after at the Kaysville City Cemetery. The family would like to thank Intermountain St. George hospice staff for their help during the last weeks of Donna’s life. In lieu of flowers, please consider making a donation to Intermountain Hospice, 11520 S. Redwood Rd. So. Jordan, UT 84095 in memory of Donna Kilfoyle. There will be a live stream ZOOM link added for Friday's service, please check back on Friday to view that.

Donna Parker Kilfoyle was born December 26, 1923 in Idaho Falls, ID to Charles Jacob and Elizabeth (Anderson) Parker. On April 3, 2021 she joined her husband, Stearns, and daughter, Karel, in Heaven along with her parents and all seven of her... View Obituary & Service Information

The family of Donna Kilfoyle created this Life Tributes page to make it easy to share your memories.

Send flowers to the Kilfoyle family.