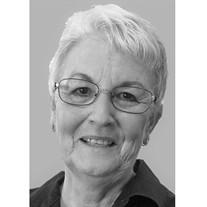 Donna Somers Turner, 77, peacefully passed away on June 22, 2019 surrounded by her loving daughters. She was born on April 7, 1942 in Pioche, Nevada to Donald Varley Somers and Margaret Louise Rathbun Somers. She married Earl “Bud” Turner for time and all eternity on September 15, 1961 in the Salt Lake LDS Temple. Donna was raised in Pioche, Nevada until the age of fourteen, at which time her family moved to American Fork, Utah. She later graduated from American Fork High School in 1960. Donna worked for Bailey Manufacturing in Pleasant Grove for a number of years while raising her children. She later began working as a school librarian for Orchard Elementary School, and retired after 15 years of service. She cherished her time working with the children and getting them excited about reading. She was awarded the Alpine School District Outstanding Classified Professional Award in 1993, and the Utah State Legislature Outstanding Employee of the Year Award in 1994, along with numerous other awards which reflected her sincere love for her work. Donna was an avid reader, was invested in researching her family history, and spent countless hours crocheting baby blankets for charity. She spent many summers camping and fishing with her family. She enjoyed her opportunity to travel to numerous places. Some of her favorites were Nauvoo, Boston, the Caribbean, New York, Alaska, Hawaii, the Panama Canal, along with so many more. She enjoyed gardening and loved watching the hummingbirds in her yard. Donna was an active member of the Church of Jesus Christ of Latter-Day Saints and served valiantly in her many callings throughout the years. She brought great joy and happiness to those she served through visiting teaching, and she enjoyed making her weekly trips to the temple. She was kind, gentle and found great joy in spending time with her family. She is survived by her loving daughters Wendy Woods-St. George, Bonnie Blackburn-Woods Cross, Toni Thatcher (Bryan)-Las Vegas, Beverly Richins (Brandon)-Saratoga Springs, and daughter-in-law Alicia Turner Heugly-Lehi; 19 grandchildren; six great-grandchildren; and her sister Joanne Seely-Nephi. She was preceded in death by her husband, Bud; parents, Don and Margaret; son, Matt; sister Beverly; and brother, Allen. Viewing and funeral services will be held on Thursday, June 27, 2019, at the Jordan Willows 2nd Ward Chapel, located at 1801 West 700 South, Lehi. Viewing visitation will be held 9:00-10:45 a.m., with funeral services following at 11:00 a.m. Interment will be at the Lehi City Cemetery. As a family, we would like to express our sincere gratitude to all of our wonderful friends at Advanced Healthcare of St. George for their loving and compassionate care. Their efforts and friendships will never be forgotten.

The family of Donna Somers Turner created this Life Tributes page to make it easy to share your memories.

Send flowers to the Turner family.