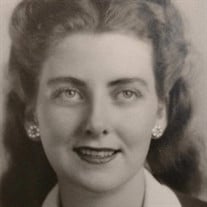 Dorothy Ruth Johnson Brimhall, 93, passed away September 7, 2018, after living a beautiful and fulfilling life. Dorothy was born on January 30, 1925, in Prescott, Arizona, to Joseph Elbert and Lucy Rosetta Scott Johnson. She now reunites with her husband, J Robert Brimhall, who passed away in 2008. Together they raised nine beautiful and talented children and are the proud grandparents of 44 grandchildren and 61 great-grandchildren. Dorothy was a talented lady! She loved to sing, write poetry, tell fun stories, write roadshows and write and perform humorous sketches. She was a whiz at short-hand, typing, bookkeeping, and hard work. In high school, the teachers had her type up the tests for the other students rather than take the tests herself. She used these skills to help support her family for much of her life. During her mission to the North Central States, she enjoyed proselyting as well as being the secretary to the mission president and, as a bonus, she met J Robert Brimhall, a fellow missionary, who would eventually become her husband. Attractive and fun loving, Dorothy was a favorite of all the young men and she fended off proposals from several suitors. When Dad proposed on their second date, and she didn’t say “No,” their adventure began. They built homes, farms, roads and ranches together, while also serving in multiple church callings and most of all being wonderful parents and sweethearts. From 1992 to 1993, they served a mission together in Hawaii. In later years, Mom transcribed and typed all of Dad’s blessings while he was a Patriarch. A talented homemaker and cook, Dorothy could make any meal seem like a feast. This was true even when all she had was beans and rice…without the rice. Having lived through the Depression, she was wonderfully thrifty and hard working – qualities she did her best to pass on to her children. Dorothy was preceded in death by her husband, parents and seven of her nine siblings who now joyfully greet her. She leaves behind her sisters, Mertice Berry and Bertie Trone; her children, Steven (Sandra) Brimhall, Ruth (Kelly) Buckner, Marilyn (Christer) Lundell, Merrill (Michele) Brimhall, Daniel (Leslie) Brimhall, Owen (Darlene) Brimhall, Robin (Terry) Malaska, Jesse (DeeAnn) Brimhall, and Nicolette (David) Fike; and a whole host of grand and great-grandchildren, family and friends. The family would like to thank Marilyn and Christer Lundell and their children for the kind and loving care they gave Mom in their home. Funeral services will be held at the Toquerville, UT, chapel, 63 N. Toquerville Blvd. September 15, at 11:00 a.m. to noon, with a viewing from 9:30 a.m. to 10:45 a.m. prior to the service.

The family of Dorothy Ruth Johnson Brimhall created this Life Tributes page to make it easy to share your memories.

Send flowers to the Brimhall family.