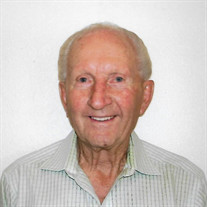 Douglas Williams Thorley, age 92, passed away on March 10, 2021, in New Harmony, Utah, surrounded by family at his bedside. He was born on September 27, 1928, in Cedar City, Utah, to William Stewart and Mary Ann Williams Thorley. He was preceded in death by his parents, siblings: Claudia, Ferron, Richard, Jessie Rae, and Colleen, daughter Gail, son-in-law Roger Bringhurst and wife Dorothy Newton. He is survived by his daughters: Lynne Harnois (Robert) of St. George, UT, Kerrie Bringhurst of New Harmony, UT, and Jan DellaVedova (Jack) of Colville, WA. Doug had 14 grandchildren and 31 great grandchildren. Doug had many fond memories of growing up in Cedar City and thought highly of his loving family and childhood friends. He enjoyed his hobby of raising pigeons and had a passion for riding horses. In his high school years, he discovered his love for cars. He built and modified his first car and started street racing at age 16. After graduation from Cedar High School, he moved to California where he enlisted in the Navy/Air Corp Reserves. He was honorably discharged in 1949, and began plastering with his brother Dick. That same year he married Dorothy Elizabeth Bell (later divorced) and they are the parents of his four daughters. He began his racing career at this time at the southern California drag strips. In 1958, he and then wife Bette Bentley started his header company, Doug’s Headers, a leading producer of exhaust systems. Doug established himself as a renowned hot rodder and business man. In 1967, he won the first NHRA Nationals Funny Car Eliminator Title at the Indy Raceway. Car Craft Magazine named him to their All Star Drag Racing Team and Funny Car Driver of the Year. Hot Rod Magazine describes him as “one of drag racing’s most famous early era drivers.” Doug was inducted into several racing Hall of Fames. Some of his more notable cars were a Chevy Nova called Chevy Too Much, and his altered Corvair which was the first to break the 200 mph mark at Lions Drag Strip. Doug also raced at the Bonneville Salt Flats in his Corvette X and was the holder of many long-standing records. After his racing career, he was awarded the coveted NHRA Wally Award for his contributions to the racing community which is on display at Cedar City High School. In his later years, Doug had a passion for his ranch in New Harmony and he and his wife, Dorothy Newton, spent many years there with their animals and beloved view of the Kolob Canyons. He rode on many trail rides and cougar hunts on his favorite horse, Gyp. In the last few years, Doug had been struggling with advancing age. One of his favorite sayings was, “Whatever you do, don’t get old!” When asked how he was doing, his instant answer was “Perfecto!” One of his great blessings in these last few years has been his dear friend and companion, Helen Flannigan. A graveside service will be held at the Cedar City Cemetery on Monday, March 15, 2021, at 11:00 a.m. and afterward, a celebration of life and family gathering at the Bringhurst home in New Harmony.

Douglas Williams Thorley, age 92, passed away on March 10, 2021, in New Harmony, Utah, surrounded by family at his bedside. He was born on September 27, 1928, in Cedar City, Utah, to William Stewart and Mary Ann Williams Thorley. He was preceded... View Obituary & Service Information

The family of Douglas Williams Thorley created this Life Tributes page to make it easy to share your memories.

Send flowers to the Thorley family.