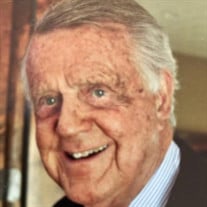 Dr. Reynolds was born on January 25, 1926 in Vashon, WA to Albert Hargrave and Claire Louise (Stowell). At five years old, young Gordon announced to his parents that he was going to be a doctor, a commitment that governed him from that day forward! Dr. Reynolds married Jonelle Simpson in 1989 in Mill Valley, CA. St. George, Utah has been their home since 1999. In addition to his loving wife Jonelle, Dr. Reynolds is survived by his three children, Scott Reynolds and his wife Cathy, Debra Reynolds and Lori Glaze and her husband Chris, three step-children, Steve Rice, Mike Rice and Linda Schwenkmeyer (deceased) Linda’s husband, Karl, as well as eight grandchildren and eleven great grandchildren. He was a Military Corpsman Navy Hospital WWII, captian MC US Army Korean War, combat medal, Purple Heart, Meritorious Award from Crown Prince Thailand. Dr. Reynolds received his BS from Kansas University where he played basketball under famed coach Phog Allen. True to his young words, Dr. Reynolds went on to receive his Medical Degree from University of Michigan, Ann Arbor. After graduating from medical school, Dr. Reynolds relocated to Redlands, CA where he opened his own OB-GYN private practice. He later served as the chief of Staff of Redlands Community Hospital. Dr. Reynolds was known as a compassionate and intuitive physician, recognized by patients and colleagues alike as a preeminent practitioner and champion of women’s health. He was committed to staying on the forefront in his field of medicine, through research, education and his ability to think outside of the box. To his hundreds of patients, Dr. Reynolds was considered so much more than just a doctor; he was a trusted and loyal friend. Dr. Reynolds was also a respected member of the Redland Medical Community. In addition to his private practice, Dr. Reynolds served as an Assistant Clinical Professor at University of California, Los Angeles and Director of Loma Linda Medical Center. Following his retirement from Obstetrics he moved to Carlsbad and accepted serving as the Medical Director of the La Costa Spa, offering leading edge ideas in preventative medicine and fitness. He also led 2 week retreats to participants all over the world to experience change of lifestyles. During his tenure at LaCosta Spa, he co-authored The LaCosta Book of Nutrition. After relocating to St. George in 1999, Dr. Reynolds was named the Medical Director of the Green Valley Spa in St. George, Utah. He served in this position until his retirement. Dr. Reynolds was an esteemed healer who will be remembered for his integrity, humbleness and willingness to explore beyond the known and into the unknown, forging and creating new ways of healing and hope. Dr. Reynolds truly aspired to letting the beauty of what you love be what you do. In his final years he allowed himself to experience another passion, nature, and watched the birds and wildlife in the back yard. In lieu of flowers please make donations to the local Food Bank. A celebration of life will be held on August 28, 2021. Check for further details.

Dr. Reynolds was born on January 25, 1926 in Vashon, WA to Albert Hargrave and Claire Louise (Stowell). At five years old, young Gordon announced to his parents that he was going to be a doctor, a commitment that governed him from that day forward! Dr.... View Obituary & Service Information

The family of Dr. Albert Gordon Reynolds created this Life Tributes page to make it easy to share your memories.

Send flowers to the Reynolds family.