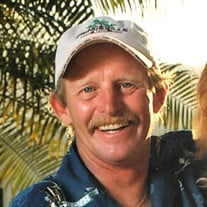 Duke Madsen, 65 years old of Enterprise, Utah passed away very unexpectedly from a heart attack at home on February 3rd, 2020. Duke was born on July 14th, 1954 in Murray, Utah to William Emile Madsen III and Barbara Knowles Madsen. Duke Married Lorie Ann Brown in South Jordan, Utah, on November 12th, 1988. Duke was raised by his mother in Cottonwood Height, Utah. He was a very hard worker and did everything he could to help his mom. After he graduated from Skyline High School he moved to Las Vegas to work with his father Emile. He lived in Las Vega for about 7 years. During that time he worked hard cleaning carpets at the hotels, rode his motorcycle and horses. Duke moved back to Midvale, Utah and started working for UPS as a package car driver. He was a day one driver with UPS. He was efficient and a hard worker for the company. Everyone he encountered and delivered to loved seeing his smile as he brought their packages with his happy, charismatic personality. He had the honor of being awarded with One Million Miles of Safe Driving. Duke retired from UPS after 32 great years. Duke was an avid hunter and fisherman. He loved camping and the outdoors. After many years of hunting with his rifle, he decided he needed more of a challenge and took up Archery with Lorie. He enjoyed shooting his bow very much. Duke also loved boating and water sports. Summers were spent on the Lake. Many planned weeks at Lake Powell, Lake Mohave, Lake Havasu, and Lake Meed with the family and many friends was the highlight of the summer. Even unplanned spontaneous trips came for weekends full of skiing, knee boarding and fishing. All of the kids enjoyed fun in the sun and Dad made it possible. Those memories live on as we continue his legacy at the lake. To say Duke loved horses is probably an understatement. He has always enjoyed riding horses his whole life. He would just saddle up and ride any chance he got. One of his favorite sayings he would quote all the time was “Ride Sally, Ride!” When Duke retired he loved to travel. Since he enjoyed horses so much, one of his Favorite trips was attending the Kentucky Derby. He loved it so much he and Lorie went four years in a row! He even made such an impression there, his picture is actually hanging in the Kentucky Derby Museum. A few other hobbies Duke really enjoyed was Golfing, cooking and relaxing at home with his wife and animals. He always did everything he was passionate about with his whole heart and excelled at it. Duke loved life and loved people. He made friends everywhere he traveled. Many of the people he would meet became life long friends. He loved his family so much and had such a BIG Heart. He would do anything for his family friends and really anyone he would meet. Duke is survived by his wife; Lorie (Brown) Madsen, Sons; Joshua Michael Madsen and Garet David Madsen, Daughters; Amber Lee Sevy (spouse: Travis Sevy) Alyshia Ann Smith (spouse: Matthew Smith) Heather Lynn Dees (spouse: Justin Dees) Brittany Lee Udy (spouse: Ryan Larsen) Mother-in-law; Nancy Ann Littlefield (spouse: Rodney Littlefield) and 19 grandchildren. Duke is preceded in death by his father; William Emile Madsen III, his mother; Barbara Knowles Madsen and his Father-in-law; Joseph Francis Brown The Family would like to thank all the EMT’s paramedics and Sheriff’s department for all their help and compassion. Also, the entire community of Enterprise, UT for their endless service and support. In lieu of Flowers the family would like to inform of those asking, there is a donation account set up at Zions Bank in Duke’s name. All contributions are so much appreciated. Funeral Services will be held Monday, February 10th, 2020 at 11:00 am at the Enterprise Utah Stake Center, 80 Center Street, Enterprise, UT. A viewing will be held before the Service from 9:30am-10:45am.

The family of Duke Madsen created this Life Tributes page to make it easy to share your memories.