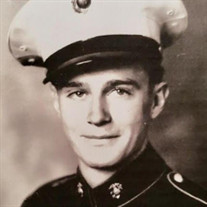 LaMaun Sorensen passed away on December 6, 2021 of natural causes at the age of 99. LaMaun was born June 7, 1922 in Koosharem, Utah but grew up and lived in Antimony, Utah where he married and raised his family for 25 years. He was born to Iris Montague and J. Ezra Sorensen. LaMaun served in WWII as a decorated Marine, and after returning home to Antimony, was attracted to a young woman living nearby in Angle, Utah. He married Pattie Jolley in 1948, and they have five children: Michael Sorensen (Sylvia) Las Vegas, Yolanda Sarale St. George, MaunaKae Pearl (Josh) Ohio, Sydnee Dickson (Jim) Salt Lake City, Russell Sorensen (Carol) St. George. LaMaun wore many hats as a BLM surveyor, rancher, mayor, etc. while entertaining friends with a gift for telling stories and jokes, often being asked to be the master of ceremonies at events and speaking at funerals! He also loved new cars and loved to drive fast, so he worked selling cars on the side in the winter to support that. He also could fix anything mechanical. His parents built, owned and operated the original Antimony Merc, gas station and post office, where LaMaun and Pattie helped them and took over when they retired. LaMaun also held many positions in the church (Bishopric, High Council, Young Men’s President, Stake Sunday School President for 9 years, Branch President) both in Antimony, and when the family later moved to St. George in 1968. LaMaun got a job driving heavy equipment during the development of the Bloomington Country Club and helped build the pond, golf course and the riding stables, where he later worked after the development was finished. He then went to work at Zions National Park for the next 15 years before retiring. LaMaun had a group of the same close friends throughout the years that he enjoyed immensely. Unfortunately, they all passed away before him, and he deeply missed them. Fortunately, LaMaun had a loving wife who took great care of him from the day they married until the day he passed on. LaMaun had two sisters: Varis Gleave (Otto), both deceased, and Wanda Sevy (Russell – deceased). He took great joy in his 18 grandchildren, and had 20 great grandchildren, and 7 great great grandchildren at the time of his death. Funeral services will be on Saturday, December 11, 2021, at 11:00 a.m. at the 520 E. 700 South. LDS Chapel in St. George, UT. A visitation will be held from 9:30 to 10:30 prior to the service. Interment with Military Honors will follow at the St. George City Cemetery. Funeral Services Recording https://youtu.be/5upyZ3tHd6o

LaMaun Sorensen passed away on December 6, 2021 of natural causes at the age of 99. LaMaun was born June 7, 1922 in Koosharem, Utah but grew up and lived in Antimony, Utah where he married and raised his family for 25 years. He was born to... View Obituary & Service Information

The family of E. LaMaun Sorensen created this Life Tributes page to make it easy to share your memories.

LaMaun Sorensen passed away on December 6, 2021 of natural causes...

Send flowers to the Sorensen family.