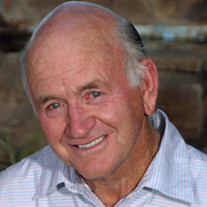 Earl Bud Barney was led away from this earthly life and on to eternal life on January 3, 2019 at the age of 81. He joined his wife Gloria, his mom Lula Morgan, dad Irvin Barney and his 3 brothers Dan, Jim, and Darryl. Earl, or Bud as many called him, was born on October 20, 1937 in Las Vegas, Nevada. He grew up in Virgin, Utah and graduated from Hurricane High in 1955. He met and married Gloria Leavitt in 1957. They were sealed in the Salt Lake Temple on January 11, 1966. He became a brick mason at a young age and worked for ‘Leavitt and Pulsipher Masonry’ until he became a masonry contractor of his own company. Earl was ambitious and driven to succeed in his trade. He was known for being honest and a master of his trade. His work showed that he believed his name and the quality of his work were important. He demanded perfection from those who worked for him and from himself. He was capable of solving difficult problems and those who worked with him were proud to be associated with him. He was in high demand because those in the business knew that he would give them quality work in a timely manner. He built homes, churches, schools, and many large business buildings. His handiwork is on display all over Southern Utah. He lived a life filled with integrity, hard work, and love. He was a man of few words and he communicated very effectively by just giving “the look” but, when he spoke people listened. Earl was a master woodturner and made many beautiful bowls for family and friends. He loved the outdoors, hunting, riding dirt bikes, water skiing at Lake Powell and snow skiing at Brianhead. Earl and his family spent many days camping on Cedar Mountain, on Sheep’s bridge and Smiths mesa. He was athletic and picked up snow skiing and scuba diving in his later years. He has left a great legacy and example for his family to follow. He is survived by his four children his son Russell (Julia) 5 children 5 grandchildren daughter Julie (Jared) 3 children 8 grandchildren daughter Colleen (Jason) 6 children 10 grandchildren Son Boyd (Connie) 3 children. He was a loving husband, father, and grandfather. His family will miss Earl dearly but they carry many wonderful memories of love and a great example of what a man should be. Funeral services: All services will be at the North Stake Center, 272 South 700 West in Hurricane, Utah. A family meet and greet will be held on Thursday, January 10, 2019, from 6 p.m. – 8 p.m. Funeral services will be held at 11:00 a.m. on Friday, January 11, 2019. Interment will be held at Hurricane City Cemetery 12:30 p.m. at 600 North 225 West Hurricane, Utah 84737.

Earl Bud Barney was led away from this earthly life and on to eternal life on January 3, 2019 at the age of 81. He joined his wife Gloria, his mom Lula Morgan, dad Irvin Barney and his 3 brothers Dan, Jim, and Darryl. Earl, or Bud as many... View Obituary & Service Information

The family of Earl Bud Barney created this Life Tributes page to make it easy to share your memories.

Earl Bud Barney was led away from this earthly life and on to...

Send flowers to the Barney family.