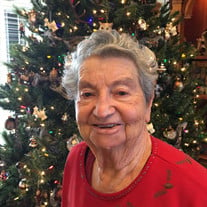 Our dear, strong and loving mother, Edna Owen Andersen, passed peacefully on January 4, 2021. She has rejoined her adoring husband, John Ross Andersen who has been waiting for her for 5 years. She was born August 21, 1933 to Charles and Daisy Owen. Edna was the youngest of 10 children, and was preceded in death by her parents and all of her brothers and sisters. What a wonderful family reunion they must be having! Edna grew up in Hunter, Utah and attended Cypress High School until she left school to help support her family. Shortly after, she was courted by dad while he was on leave from the navy, and they were married in the Salt Lake Temple on November 14, 1951. They settled in Tooele, Utah where they raised 6 children. Ross and Edna lovingly supported each other until he passed away 5 years ago. Growing up during the depression and times of food rationing taught her many lessons that she carried with her throughout her life. Those lessons included “waste not, want not” and self-sufficiency. She determined that we needed to cultivate our own food, and developed a love of gardening which she has shared with many. She also decided we needed farm animals. Imagine her “city boy” husband’s surprise, when he returned home from work to find that she had bought a cow and arranged for a neighbor to teach him how to milk it! Edna was a very hard worker and expected us to work hard also. She also knew how to play and we grew up with picnics in the canyon, water fights, night games and ball games. We often went camping and fishing with Little Grandma, aunts, uncles and cousins. We always attended the yearly family reunion. We don’t remember ever missing a reunion, even when we had to travel to Oregon to attend. Family meant everything to mom, and she remained close to her immediate and extended family through her efforts. Edna loved to cook, and after her children had grown, she attended culinary school. Afterward, she was employed at the Lion House in Salt Lake City, where she became the head cook and supervisor over wedding luncheons and banquets. Her family also continued to benefit from her cooking skills at the many family dinners and reunions. She also took great interest in homeopathic health, and spent a lot time studying and learning herbal remedies. She was eager to share what she learned with others and cared for Dad for many years. She was an avid genealogist because of her great love of family and her strong testimony of eternal families. Even when she had a house full of young children, she would travel to the Salt Lake City Genealogy Library to do research. Edna and Ross served as senior missionaries in Mesa, Arizona where they worked in the visitor’s center helping others with their family research. She learned the new programs and used technology to continue working on genealogy right up to the end of her life. Edna was a faithful member of The Church of Jesus Christ of Latter Day Saints, and served in many callings during her long life. She had a strong testimony of the gospel, which she shared often with members of her ward, her children, grandchildren and great-grandchildren. She wrote her testimony of the Savior, Jesus Christ, in the Christmas cards that she sent to her family this year. Edna was preceded in death by husband Ross, her son Charles, daughters-in-law Patty and Rose as well has her parents and her siblings. She is survived by her children John (Christine) Andersen, Pamela (Terry) Jewett, Daughter-in-law Debora Andersen, Ivan (Teresa) Andersen, Daisy (Bill) Kelly and Laurellee (Wade) Zimmerman as well as 15 grandchildren and 33 great grandchildren. Our beloved mother had a positive impact on all those who knew her. She will be greatly missed.

Our dear, strong and loving mother, Edna Owen Andersen, passed peacefully on January 4, 2021. She has rejoined her adoring husband, John Ross Andersen who has been waiting for her for 5 years. She was born August 21, 1933 to Charles and Daisy... View Obituary & Service Information

The family of Edna Jean Andersen created this Life Tributes page to make it easy to share your memories.

Send flowers to the Andersen family.